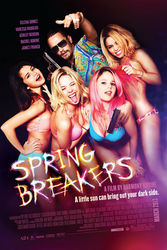 I had a great time on spring break in Fort Lauderdale back when college kids could get away with almost anything. Ultimately, we never did much damage and certainly didn’t harm the residents. We pretty much stayed to our area of the resort and the tourist bars that were all decked out for spring break. There have been a variety of films based on or taking place during spring break in Florida or other popular tourist destinations. Most have been comedies. I can’t figure out what Spring Breakers is supposed to be other than awful. It’s a distinct mixture of two types of films, both of which are derivative, stupid and offensive. I’m always up for college coeds in bikinis or less and drug dealer gangsters when they’re kept in their own genre movies. Spring Breakers brings these disparate elements together for a collision of epic ridiculousness.

I have no idea what writer/director Harmony Korine (cowriter of Kids) hoped to accomplish with Spring Breakers. Voice-over recollections and various film techniques might lean more toward an artistic dissertation on youth culture and hedonism, but then again, there are too many irritating and exploitative scenes that are agonizing to watch that it couldn’t be an art film. I think that Korine decided to push the limits, and Spring Breakers is the result. The movie mostly feels like an extended music video with heaping helpings of sex, drugs and rap. There’s a reason that music videos are usually less than 5 or 6 minutes in length.

Spring Breakers begins with four friends at a college who have no money and want to go to St. Petersburg for their break. Christian group member Faith (Selena Gomez in her first R-rated role), Candy (Vanessa Hudgens with a blonde wig), Brit (Ashley Benson) and Cotty (Rachel Korine with pink hair) need a plan to get some money. Without initially telling Faith their scheme, Candy, Brit and Cotty rob a chicken restaurant. The girls all head down to Florida where they party out of control until they end up in jail with no money and nobody to help them. Local rapper and aspiring drug dealer Alien (James Franco) bails them out and takes them back to his place where the girls ultimately get involved in his beef with drug dealer Archie (rapper Gucci Mane). Soon the girls are handling guns as if they’re part of Alien’s crew. The first half of Spring Breakers feels like a Girls Gone Wild video, and the second half is modeled after gangster films like Scarface. Neither half is entertaining.

The acting in Spring Breakers is atrocious. Korine put together an interesting combination of actresses and guided them through exploitative actions that cause you to grimace. Gomez, Hudgens and Benson are familiar to people because of their television and Disney connections. It’s like they’re out to prove that they can take on adult roles and show how grown up they can be. It’s an act of desperation not unlike the poor casting of Dakota Fanning and Kristen Stewart in The Runaways, which required them to curse, smoke and act like rock stars. Rachel Korine fares even worse. She’s the director’s much younger wife, and she appears nude in scenes that are uncomfortable to watch because of how the camera lingers on her body as if the director is showing off his woman. I only hope that he treats her better away from the set. When the four young ladies dance around and sing (badly) “…Baby One More Time” by Britney Spears, I cringed and wished that I had a mute button for the audio track. Here’s a case where perennial lip syncher Gomez should have stuck with her normal performance technique and made the others join her as well.

Franco has spread himself so thin lately with his studies in college, writing and acting that Spring Breakers must have been the result of lack of discipline. Franco has never been this bad and has often been much better. His performance is so pitiful and painful to see that it’s like watching a car accident in slow motion. His corn rows, grills on his teeth, weapons cache and outfits are all out of central casting for a rapper stereotype. This is something you would see on Saturday Night Live. Supposedly based on the underground rap artist from Florida named Dangeruss — he stole my rap name! — Alien forms a perfect gangster rapper caricature. He runs around his crib spouting nonsense and telling the girls to “Look at my shit” ad nauseam. Yes, Franco, I’m looking at your shit… performance. I can’t wait for the RAZZIE Awards. Spring Breakers is a shoo-in.

It’s not difficult to effectively show people out of their element with guns and violent behavior. Oliver Stone did it right with Natural Born Killers. At the time, Woody Harrelson and Juliette Lewis were unusual casting. Korine doesn’t deliver believable characters or actors to inhabit them. Moreover, he tries to perform some kind of avante-garde effect by repeating some lines over and over as if jumping back a few seconds in the film. That’s an annoying film school exercise that doesn’t belong in a motion picture in wide release. Is there anything redeeming or enjoyable about Spring Breakers? It shouldn’t ruin anyone’s careers because few people went to see this film.