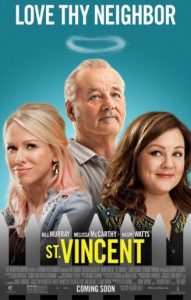 Henry Wadsworth Longfellow once wrote, “Into each life some rain must fall.” Vincent McKenna (Bill Murray) would abrasively dismiss such talk as the ramblings of a sorely misguided optimist. The warming rays of sunlight that others claim to find in abundance have only rarely managed to break through the thick clouds of his life. What’s left behind is a worn, cynical shell of a human being with seemingly no regard for his fellow man.

Into this maelstrom of self-destruction step Maggie Bronstein (Melissa McCarthy) and her son Oliver (Jaeden Lieberher). They’ve had the unwitting misfortune of moving into the house next to Vincent’s. Although similar in design, the two homes couldn’t be more distinct in demeanor. Maggie’s new home is bright, cheery and well kept. Vincent’s domain might just as well include a moat and a pack of frothing rottweilers for all its welcoming nature. Their impromptu introduction goes over like an errant balloon in a razor factory. To say they get off on the wrong foot seems to be one foot too few. Despite the ominous portents to the contrary, Maggie’s better judgment has to be put on hold when she’s asked to stay late at work one afternoon. She begs Vincent to look after Oliver until she can get home. He grudgingly agrees. When the favor pops up a second time, the three agree to a highly tenuous but curiously effective partnership that helps each of them in ways that none of them anticipated. 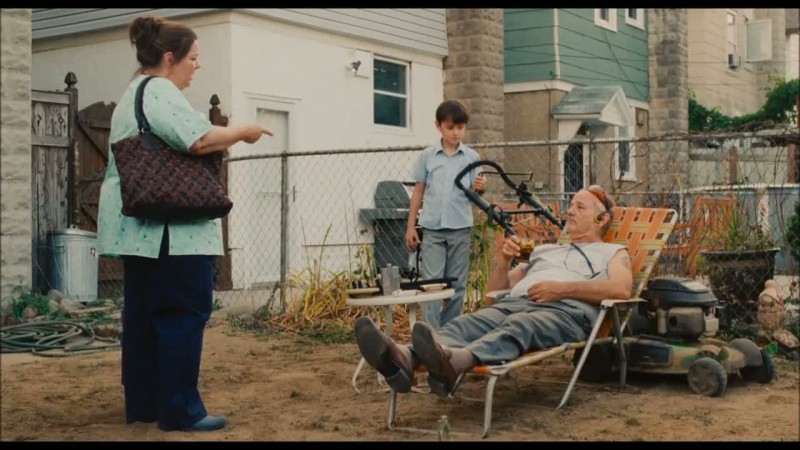 This film festival favorite reminded me at once of 2002’s About a Boy. Both share a loosely similar plot involving a young boy who manages to connect with an older, irresponsible male counterpart. It’s a vehicle that seems tailor-made for Murray in nearly every way. Vincent evolves from a one-dimensional, despicable stereotype into a much deeper, emotionally complex character tinged with a rapid-fire sense of humor that very few actors can deliver with such relative ease. Murray’s ability to sell us on the transformation is critical to the success of the film, and he never lets us down.

McCarthy breaks through with a touching performance that finally moves beyond the singular, tiring, shrill note of her recent comedic disasters. Newcomer Lieberher pulls off a real treat by playing the perfect Abbott to Murray’s Costello. Unfortunately, the same kudos can’t be extended to Naomi Watts as Vincent’s aging, pregnant prostitute of choice named Daka. It’s not only a completely superfluous role, but it’s also one that pulls the viewer out of the story with every appearance. The rest of the supporting cast find their characters similarly mistreated. None can rise above the poorly constructed afterthoughts that they so clearly seem to be.

While a total treat for Murray fans — another chance to watch a true master at work — the script itself can’t measure up. For every wonderful moment — there are several — we get roughly the same number of half-baked, entirely unresolved fragments. By the time the film begins to draw the curtains, we’re just as ready for them to fall.