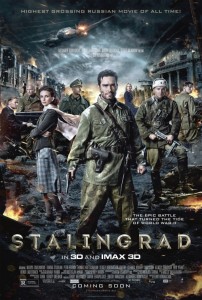 A ragtag group of Russian soldiers defend a key position against an onslaught of determined German invaders during the battle for Stalingrad.

One of the most chilling statistics of World War II is the sheer number of casualties suffered by Soviet forces. A classic case in point is the epic struggle that took place in the capital city of Stalingrad. In just this one battle, the Red Army sustained 1.2 million casualties, including nearly 500,000 dead. To put that into perspective, the United States lost a total of 416,800 in the entire war. Think about the bloodshed we experienced at Iwo Jima, Okinawa, Normandy, the Ardennes and so on.  Add every single one of them up, and they still don’t match what the Russians endured in this one single battle. Stalingrad is to Russians what Pearl Harbor or the Alamo are to Americans, except on a much larger and deeper scale.

This Russian-language film is told in flashback from the perspective of a current-day rescue worker recounting the tale to a survivor of a collapsed building. His mother raised him on the story of his “five fathers” who, together, kept her out of danger during the carnage at Stalingrad. The five, all soldiers in the Red Army, managed to reach a defensible apartment building in the heart of the city, known in real life as Pavlov’s House — a location that’s eerily familiar to many video game players as it’s been modeled in a number of top combat simulations. They held off the seemingly unstoppable Nazis there in a battle that would ultimately mark the beginning of Germany’s eventual downfall. 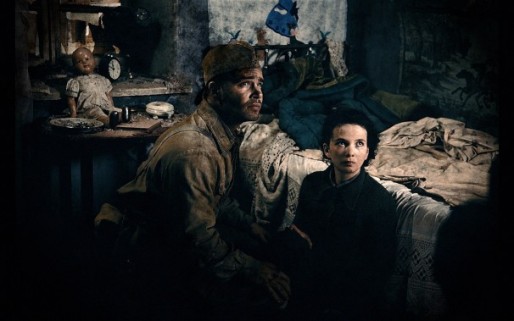 Regrettably, the film takes a solemn historical crusade and trivializes it with ridiculously over-the-top special effects and woefully underdeveloped characters. If I could have written this review in “bullet time,” it would have matched the style of much of the film. No opportunity to employ an effect is overlooked. Every inflicted wound is incomplete until it’s matched with its inevitable slow-motion climax. I half expected a love scene to shift midstream into the same presentation style.

The acting is hit and miss with more than a few heavily stereotyped evil Nazis flitting about. The only actor whom American audiences might recognize is Thomas Kretschmann as German officer Hauptmann Kahn. Kretschmann was wonderful as the sympathetic Nazi officer in The Pianist. It may be the same uniform, but it’s much cheaper material this time around. Surprisingly, his love interest, played by Russian actress Yanina Studilina, is the only character we really care about in the entire movie.

This epic tale is reduced to an epic fail in a story that’s far too full of itself, lacking any of the reverence such a solemn and sacred event deserves.