Stand Up Guys has a lot going for it with its cast and premise, but in the end, it certainly doesn’t elicit a standing ovation. In fact, the only thing standing up in this film is Al Pacino’s pecker after a few too many male assistance pills. That tired sequence has been done to death before. I certainly remember both Robert De Niro and Jack Nicholson encountering these little blue pills and their aftereffects. The fact that the filmmakers would even waste screen time for such a stale joke is indicative of the quality of the movie. It boasts a good cast but ruins it with a flaccid plot. 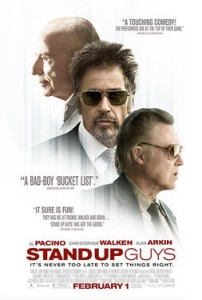 Director — when he’s not working on his comedy — Fisher Stevens (codirector of excellent documentary Crazy Love and director of Just a Kiss) and writer Noah Haidle try hard for this film to be a comedy, but in the end, it’s a wistful mix of melancholy and sarcasm as two low-level hoods in St. Louis (I think) spend one very long, eventful night together. Valentine (Pacino) — his friends call him “Val” — gets out of jail after 28 years. He took the rap for a job that went south and resulted in the death of his boss’s son. A few people in the film call him a “stand up guy” for keeping his mouth shut all this time and just serving his sentence. Old friend and associate Doc (Christopher Walken) is waiting for Val on the day of his release. It’s no spoiler — because it’s in the trailer and is revealed in the first few minutes of the movie — that Doc has been told to kill Val by their old boss Claphands (familiar character actor Mark Margolis in sadly just a few scenes). Doc is conflicted because he really loves old buddy Val, but Claphands is leaning on Doc to make the hit or become a target himself. Doc’s assignment is really the MacGuffin of the film. It’s ultimately a celebration of sorts. Val knows that it’s likely his last night alive, so Doc allows Val to do whatever he wants — from a tryst with a hooker to a big steak dinner.

All the elements are in place for a hit comedy, but surprisingly, Pacino and Walken are lifeless and dull. Walken was much better in Seven Psychopaths, and that’s not nearly one of his best films. It could be that Pacino and Walken just wanted to work together and forgot that they were the stars once they got on set. Who knows? I just expected more from these guys. Instead, the film feels like Grumpy Old Con Men without the comedy. In addition to the aforementioned enhancement pills, Pacino retreads another familiar scene here when he asks a young lady at a bar for one slow dance so that he can know what it feels like to hold a woman close while dancing one more time. This dance worked much better in Scent of a Woman. I wonder if the filmmakers had this in the script first or added it when Pacino joined the cast. Either way, it’s nice but derivative.

The only life comes from the supporting cast. Val and Doc decide to look up another associate named Hirsch (Alan Arkin) after they meet his daughter Nina Hirsch (an underused Julianna Margulies) in the ER for Val’s reduction in blood flow. Hirsch is in a retirement home and jumps at the chance for a night out with the guys. They’re involved in a car chase with the cops and go back to the mini-brothel run by Wendy (a subdued Lucy Punch) where Val made use of those pills earlier in the evening. If Hirsch had stuck around for the rest of the movie, it would have been much better, but alas, Arkin’s scenes are fleeting. Val and Doc make a few stops at a diner where Doc’s favorite waitress, Alex (Addison Timlin), works the night shift. TV actress Timlin lights up the screen every time she appears; it’s no wonder that Alex inspires Doc’s hobby to paint sunrises. Vanessa Ferlito steals the movie for a few minutes as Sylvia, a young lady whom Val and Doc rescue and then unleash on a bunch of hoods. Her accent smacks of Northern Jersey or New York City, but this film’s setting is mysterious and filming locations were in Los Angeles. Ferlito’s spunk jolts the film alive for a few minutes as do the scenes with Arkin and Timlin, but Pacino and Walken really needed to do the heavy lifting here.

Stand Up Guys is rated R for its violence and language, but it’s really not too bloody or vulgar. It could have probably passed for PG-13 with a little trimming. Jon Bon Jovi contributes a couple of original songs to the movie that play over the credits, so if you make it that far, stick around for these decent numbers. The end of the film is really where it should have begun or at least kicked into gear after the first half-hour. My guess is that they ran out of scenarios for Val and Doc and just left on a high note. This time of the year is when studios dump their leftovers into theaters, and this 2012 film feels like one of those. Pacino and Walken typically chew up the scenery with their often-imitated mannerisms and (for Walken) method of speaking, but all that sizzle has been removed here.