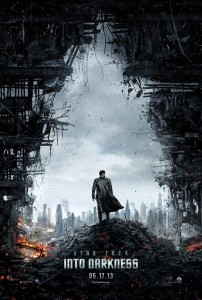 There’s a reason that fan fiction is so enjoyable. When someone who loves an entertainment property creates his own story to add to the canon, it’s likely that it’s as good as if not better than other entries. As a fan of Star Trek, director J.J. Abrams rebooted the series in 2009 and still managed to link it to the past with the participation of Leonard Nimoy from the original TV series and movies. Abrams returns to the Star Trek universe once again with Star Trek Into Darkness. This satisfying sequel expands upon what was good in the preceding film and layers on lots of elements, characters and references that will please die-hard Trekkies, Trekkers or whatever they want to be called these days. There are plenty of improbable stunts, fights and vehicle chases here, so the secret to the sequel’s success may just be that this James T. Kirk reminds me a lot of James Bond.

Abrams is joined by a dream team of writers in Roberto Orci, Alex Kurtzman and Damon Lindelof. Orci and Kurtzman — writers on Fringe — previously joined Abrams in the same roles on the 2009 film. Lindelof worked on the TV series Lost. I can only imagine the development sessions for this movie; there seems to be a little bit of everything in the plot. All of the main cast members from the reboot return, including Chris Pine as Kirk, Zachary Quinto as Spock, Zoe Saldana as Uhura, Karl Urban as Bones, Simon Pegg as Scotty, Anton Yelchin as Chekov and John Cho as Sulu. Bruce Greenwood makes the perfect Dutch uncle as Christopher Pike, and even Leonard Nimoy returns as Spock Prime, the Spock from the original series and movies who was discovered in the previous film. Although I think Yelchin’s Russian accent is bad and distracting, I am otherwise pretty happy with the cast, and the actors certainly display a familiarity and ease of working together that you would expect after a few movies — not just one.

Overshadowing all of these actors and characters both is Benedict Cumberbatch as Starfleet worker John Harrison, who turns out to be a mysterious superhuman man known as Khan Noonien Singh in one of the worst-kept secrets of the movie business. I won’t get into the specifics of the plot, but it comes down to Khan’s attack on Starfleet and a recently demoted Kirk in a mission to go after Khan to bring him to justice. Admiral Marcus (Peter Weller of the RoboCop series) has a secret agenda, and his daughter Carol (Alice Eve) sneaks on board the Enterprise to join the mission. Before the Enterprise returns to Earth, Khan and Kirk will tangle more than once, and the Klingons even show up on a supposedly deserted planet named Kronos. Cumberbatch is really quite good both physically and emotionally whether he’s fighting Kirk or one of his crew members hand to hand or delivering his lines with such perfect enunciation and a deep voice. Continuing my analogy, Khan is a great villain a la the best of the Bond villains as he threatens one minute and cajoles the next. There’s no denying his presence, personality and memorable nature.

No Star Trek movie would be complete without gadgets, technology and special effects. This one is no different. It reintroduces the familiar items like phasers and communicators and adds new ships and technologies to the mix like the dreadnought ship and a suit that enables travel through space between ships. I can’t imagine a scene without layers of special effects except perhaps a bar scene between Kirk and Pike. It’s breathtaking to watch the space battles and chase scenes. There’s so much destruction and detail here that it’s easy to imagine the dozens of computers needed to render the scenes. I was impressed at all of the near-misses and incredible luck that characters have in avoiding death. These situations make the film’s action scenes utterly ridiculous and simultaneously engaging. I never took my eyes off the screen in these sequences and especially enjoyed watching Kirk travel through a debris field with nothing more than thrusters in his space suit and Kirk-level luck to go from Point A to Point B. That jaunt would make a great level in a video game as I’m sure many of them would. A chase scene on Kronos with Klingon Birds of Prey following a Starfleet shuttle feels a lot like TIE Fighters after the Millennium Falcon in Star Wars. Perhaps Abrams was already thinking about those future Star Wars films when he shot this chase?

Star Trek fans will find a lot to like here. There are elements that might go right over the heads of mainstream moviegoers like a reference to Christine Chapel or a touching scene late in the movie between Kirk and Spock. Lack of familiarity with Star Trek does not diminish the enjoyment of the film because there’s plenty there to keep you involved like the aforementioned action and chase sequences and the great villain. Those in the know will appreciate the endless badgering by Bones, the mothering nature of Scotty toward the Enterprise and multiple references to the red shirts of crew members. (Those with red shirts in the TV series usually died on missions.) I’m not 100% confident in my Star Trek trivia, but Star Trek Into Darkness may mark the first use of Uhura’s first name. In one short scene, a transport officer is played by Christopher Doohan, son of original Scotty James Doohan. At least one other popular species makes an appearance, and in an early scene straight out of my Bond comparison, Kirk emerges from the bedcovers to answer the call of duty and stop his hanky panky.

I was very surprised how funny this film is. Some of the best banter involves Spock and just about anyone. Who knew that the emotionally self-repressed Spock could be so funny? My favorite line of the movie is “Never trust a Vulcan.” It makes a lot more sense in context. The one-liners flow over the course of the film and balance the more serious and dire scenes. The characters do a lot of running, too, despite technologies like transporters at their disposal. If it’s not Kirk running after Khan, it’s Chekov or Scotty running around the engine room to bring the systems back online. The kinetic nature of some scenes and the awesome importance of others lead to a solid score by composer Michael Giacchino, whose music similarly enhanced and expanded Lost.

Star Trek Into Darkness is not a perfect film. There are still some minor problems that annoyed me. The title explicitly omits a colon, which seems rather silly. It’s more notable that the “Into Darkness” part is vague. It’s not meant literally, so just about any Star Trek film with a villain or difficult circumstances could use the same title. Abrams places a wide variety of humanoid aliens on the bridge of the Enterprise and shows many of them for just a second or two. This is distracting and feels like Abrams just wanted to cram them in there as an afterthought or perhaps to make action figures. I already mentioned Yelchin’s bad accent. Although I thought that the action scenes were exciting and fun, I can see how others might find them over the top and impossible. Given the damage to the vehicles and people, would any of them really survive? I’ll continue to bash at 3D that adds nothing to the experience. This is one of those films. I’ll applaud the director who stands up to the studios and refuses to release their big-budget film in 3D. This gimmick has worn out its welcome.

I really look forward to the next film in this revitalized series. Abrams will likely juggle duties between Star Wars and Star Trek films over the next decade or so. I hope that neither series suffers. All of the characters and relationships are in place for an even better Star Trek film. It just needs the right plot and a good number of surprises. Until then, Star Trek Into Darkness continues a fine tradition of storytelling and science with Kirk and his crew facing challenge after challenge.