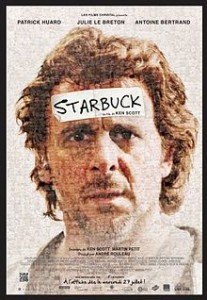 A soon-to-be father, not sure about his ability to handle parenting suddenly finds that he’s the biological father of 533 children in the French Canadian comedy, Starbuck.

David Wozniak (Patrick Huard) is a 40-something screw-up. He can’t seem to do anything right in life. He owes loan sharks $80,000, can’t handle a simple meat delivery job for his own family and his longtime girlfriend is pregnant and unsure if she should have him around. Then in steps an attorney for the local fertility clinic who drops the bombshell that, under the pseudonym Starbuck, David’s many trips to the clinic in the ’80s, resulted in him fathering 533 offspring. Now 142 of them are suing to find out his identity.

The concept is mainly ridiculous and over the top but somehow it still manages to work and that’s mainly due to its star. Huard’s extremely likeable as David and manages to bring a down-to-earth believability to the role. The only other major character in the film is his best friend Avocat played by Antoine Bertrand. Avocat is only marginally more stable than David and acts as his rather challenged lawyer in this affair. The pair play very well off one another and provide some nice original laughs.

The main bulk of the story takes place between David and his attempt to connect with some of his newly discovered offspring — though anonymously. Through these interactions David begins to learn much about his own personality and skills he never thought he had. We get to watch David grow and Huard makes us root for the growth.

The comedy elements play out well with some nice, hearty laugh lines and a light-hearted approach that serves the film very well. It doesn’t take itself too seriously at any point. There are also a number of surprisingly touching moments between David, his girlfriend, his father and others. These moments caught me off-guard but also helped make this a well-rounded experience.

One interesting note is that I thought — for much of the film — that it was French when it’s simply French-speaking Canada. Once I realized this it explained a number of confusing points. David, for example, spends almost the entire film wearing American sports gear from various teams and sports. That seemed odd for someone from France but perfectly normal for a Canuck.

The soundtrack is also notable. It’s pretty much music I’ve never heard before but every bit of it was perfect for the film and rather memorable.

Starbuck is, as I said, a ridiculous concept but, nonetheless a touching comedy that left me smiling for the rest of the day. What’s not to like?