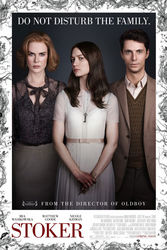 I love creepy, moody films whether they’re thrillers, horror flicks or some combination thereof. The work of some filmmakers like David Cronenberg, Tim Burton and David Lynch just ooze unique characteristics and techniques that identify them. Korean director Park Chan-wook fits in with that company, too. Known best as cowriter/director of the Vengeance Trilogy (Sympathy for Mr. Vengeance, Oldboy and Lady Vengeance), Park’s first English-language film is Stoker. With a wonderful tagline like “Do Not Disturb the Family,” how could you go wrong? The answer is that Park didn’t. Stoker is a coming-of-age story like no other that blends the creepy elements in the script with Park’s visionary directing style for a creepy thriller-drama that leaves you satisfied and a little shocked.

Stoker is an unexpected delight because of the combination of talents involved. Park directs a script by actor Wentworth Miller (Prison Break). How much of the result comes from the script and how much comes from Park can probably never be determined exactly. Regardless, the film creates a mood and pace that lures you in and keeps your eyes glued to the screen. A brunette Mia Wasikowska (Alice in Wonderland and The Kids Are All Right) stars as India Stoker, a young girl from a rich Connecticut family whose life really begins when she turns 18. Her father, Richard Stoker (Dermot Mulroney in flashbacks), dies in a horrible accident, and her previously unbeknownst Uncle Charlie (Matthew Goode of Brideshead Revisited) arrives on the day of the funeral to comfort India and Richard’s widow, Evelyn “Evie” Stoker (Nicole Kidman). As Park has described this film, it’s really a dark fairy tale that becomes a nightmare with a young prince arriving to take the place of the dead king and win over his queen and princess daughter. If you look at Stoker with that perspective, it resonates a lot more.

India, Charlie and Evie are such wonderful characters that I wish there were more to their stories than this movie. Without looking like a Goth chick, India certainly fits that mold. She’s brooding and moody, and she almost never smiles. This change probably started with the loss of her beloved father, but who’s to say because a bully named Pitts (Lucas Till) at school seems to treat her the same way as he did before the accident. Housekeeper Mrs. McGarrick (Phyllis Somerville) looks out for India after Richard’s death, and Gwendolyn Stoker (Jacki Weaver) shows up for a visit to check on Evie and India. Look for Harmony Korine (cowriter of Kids and writer/director of the current Spring Breakers) in a small cameo as Mr. Feldman. Fellow Aussies Wasikowska and Kidman are convincing as an American mother-daughter pair grieving their loss, and Goode is effectively creepy as the uncle whose agenda is unknown. Is he there to take Richard’s place, or does he have other plans for India? 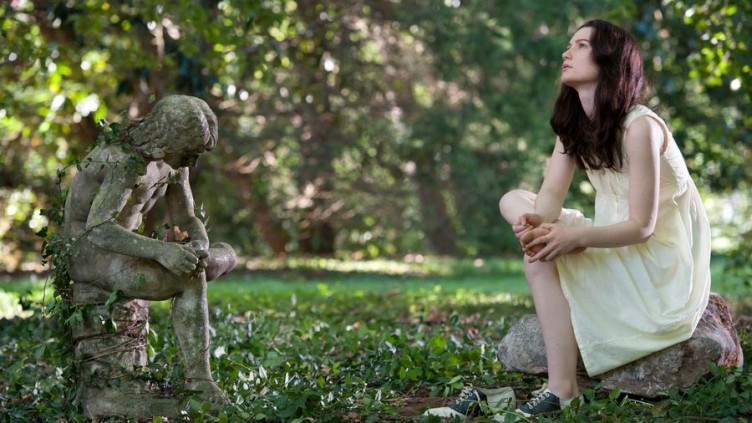 Park takes this story and runs with it, infusing it with visuals that are as unusual as the characters and content. India receives a new pair of white saddle shoes every year on her birthday, and the current pair is getting tight. Park emphasizes this point not by India limping in her shoes but by showing a close-up of a blister on her toe. Another image that resonates long after the scene is India lying on her bed surrounded by all of the saddle shoes she’s worn in her life. Park balances the characters by having Charlie wear dark saddle shoes. Park’s films also use violence in artistic, beautiful ways if that’s even possible. Stoker is no exception in that the limited violence that occurs is presented in unusual ways. Park shows exactly what’s necessary to unsettle the viewer and not totally lose them in the blood or bones. Another image that stuck with me is a wonderful transition from Evie’s red hair as it’s brushed by India to a field where India and Richard lie in wait for ducks to shoot. There are many more visual cues and rewards for paying attention carefully to the images. Special effects are kept to a minimum, but there are a few scenes with a digitally created spider that skitters near and on India. My take on the arachnid is that it’s a symbol for Charlie and his influence on India.

I liked Stoker so much that I saw it twice, and that rarely happens because of the number of movies that I see. I can’t wait for Park to make more films in either English or his native Korean. He’s a creative filmmaker who makes every story his own and leaves an impression that haunts you after the credits roll, which they do in reverse in Stoker for added effect if you didn’t figure out by then that things aren’t exactly right with these characters. The secrets that come out in the final act of Stoker are worth all of the time spent building up to those moments. Stoker ebbs and flows with tension that just works so well if you let it flow over you.