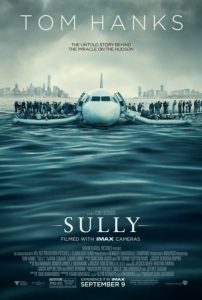 How many times have you flown by plane? Did you ever learn the names of the pilot or any other members of the flight crew? I doubt it. I have shaken pilots’ hands and said hello to flight attendants on just about every flight that I’ve taken over the past 30 years. Still, I don’t know anything about them other than that they’re probably going to fly me to my destination with few or no problems. After the events on January 15, 2009, on US Airways Flight 1549, everybody around the world knew the name of pilot Chesley “Sully” Sullenberger and his skilled water landing of a crippled plane in the freezing Hudson River. In the equally able hands of director Clint Eastwood, Sully’s story and the details of that historic flight are presented as a mishmash of movie styles that somehow manages to work like Flight 1549 despite some missing pieces here and there. Sully entertains at many altitudes while grounding the story on the personality and experience of its fascinating central character.

Based on the book Highest Duty by Sullenberger and Jeffrey Zaslow, Eastwood and writer Todd Komarnicki explore the short duration of Flight 1549 and its aftermath through the eyes of Sully (Tom Hanks) and, to a lesser degree, First Officer Jeff Skiles (Aaron Eckhart). Flight 1549 lost both of its engines to a bird strike shortly after takeoff, and the only safe option that Sully could find was to ditch the plane in the Hudson River rather than try to limp along to an airport runway. Eastwood humanizes Sully by showing conversations on the phone with his wife Lorraine (Laura Linney), so Hanks and Linney don’t really share screen time. It’s a full third of the movie before Eastwood takes us through his compelling re-creation of the doomed flight. Those scenes had me on the edge of my seat despite knowing what was going to happen — a testament to Eastwood’s directing skill and all of the cinematic elements (special effects, editing, sound, etc.) coming together perfectly. Things switch for the rest of the film into the similarly intriguing investigation by the NTSB, which is largely the part of the story that people don’t know.

Hanks could take on just about any role, and I would watch it. There are many reasons that he’s considered one of America’s leading actors, and much of that confidence, ease and command of the screen are on display here. His characters don’t seem to have much luck traveling (Apollo 13, Cast Away, The Terminal and Captain Phillips), so Sully fits right into that subset of his film career. Despite his great work here, Hanks doesn’t really look like Sullenberger. They gave him a moustache and gray hair, but it’s hard for Hanks to capture Sullenberger’s avuncular personality and sense of humor that I’ve seen in interviews. Eckhart is fine in the copilot’s seat, but his character’s huge moustache distracts every time that he’s on screen. Linney has been reduced to the lead character’s wife on the other end of a phone, so there’s not too much that she can do here. As NTSB investigators, Mike O’Malley, Jamey Sheridan and Anna Gunn are more memorable as the antagonists. Also, Patch Darragh has some strong scenes as the unlucky air traffic controller who tries to direct Sully through the crisis.

Eastwood delivers a film that touches upon a variety of genres in its 96 minutes. I expected more of a biopic than anything else. After all, it’s based on a book about a pilot. I wanted to know more about Sully and his life before that fateful day. That’s simply not the focus, nor is much learned about any of the passengers. What’s left is a drama, a bit of a survival/disaster movie and a courtroom trial for good measure. I still remember the repeated instructions of the flight attendants saying, “Brace, brace, brace. Heads down. Stay down.” Eastwood inserts some scenes of Sully’s imagined outcomes and nightmares — is he suffering from PTSD? — and I question the inclusion of these sequences, especially because they seemed tacked on and not explored and the film’s release coincides with the weekend of September 11 and all of the memories that date dredges up. People who hate flying or have been on rough flights and especially the survivors of Flight 1549 may have difficulty watching these fantasy sequences. They have a strong look of computer graphics, so perhaps Eastwood tried to visually reveal their lack of reality without being too obvious.

For Eastwood’s previous movie, you can argue about the subject matter (Chris Kyle), war, America’s presence in Iraq and Afghanistan, snipers and Eastwood’s politics until you’re blue in the face. American Sniper is a better movie for so many reasons, including an intended character arc over the course of the film, a stronger visual tapestry and real conflict in the form of war scenes and character struggles. Sullenberger is a squeaky clean guy with an impressive career. With no dirt in his past or mistakes in this famous flight, it’s unfair for him to be judged on 208 seconds instead of thousands of hours over decades as a pilot. Audiences feel that positivity in Sully’s background, so the only way that Eastwood could ever add conflict is with the testy scenes that include the NTSB “villains.” I feared that Eastwood would not only re-create Flight 1549 but also re-create the Denzel Washington film Flight. Fortunately, he doesn’t go much further than a few questions directed at Sully about his last drink and any conflicts at home, so Sully is Flight lite at its tensest moments.

I wish that Eastwood would stop ruining his better movies with substandard music. The mellow piano sounds that play over much of Sully give it the feel of a TV movie rather than a feature film. The scenes of the water landing and subsequent rescue are the central part of Sully and really the highlight of the film. It might feel rushed or edited because it goes by so fast, yet the real time between the bird strike and the plane taking on water in the Hudson River was less than four minutes. Stay through the credits for some scenes that put the film into perspective. My takeaway from Sully is that Eastwood gave us a wonderful portrait of an iconic pilot and this impossibly successful flight that avoided becoming another airline statistic. It’s worth a trip to the theater if you’re a Hanks fan or just want to know more about Flight 1549. Just try to avoid hitting any birds on the way.