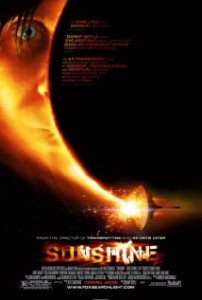 My wife and I caught Sunshine during the single week it played at the local art house theater. I’m not surprised it vanished so quickly but it really didn’t deserve that quick a hook. If you’re a sci-fi fan, get a copy of this when it hits DVD and enjoy it. It’s far from perfect but it is an interesting and enjoyable movie (though I do wish they’d have re-thought the last act).

One issue is that it stars Cillian Murphy. It’s not that I don’t like Mr. Murphy, it’s just that I’m always so distracted by his off-beat looks that I can’t focus on his character or the story when he’s onscreen. His eyes simply do not fit the rest of him. Perhaps the film’s biggest issue is that it’s all a bit difficult to swallow given the choices of that final act.

It actually reminded me a bit of 2001: A Space Odyssey in several places, both good and bad. It’s certainly not going to be remembered by anyone like that film is but, as I said, it’s still a curious little film that won’t totally ruin your day.