Another Friday, another movie. This time we checked out Superbad, the new Judd Apatow comedy.

It still amazes me that this guy has so many awesome hit movies and failed so notably (and surprisingly) with TV shows. It makes no sense. 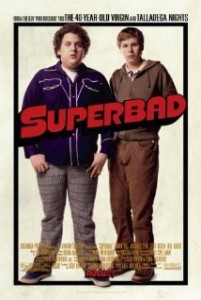 The great part for me is that I confused this movie as being the one with the kid who wants to be a stuntman by trying to ride his bike over huge jumps and such. What a relief it wasn’t that. Superbad is rather a funny experience. You’ll find yourself laughing out loud several times while seeing it if it’s your kind of movie. What kind of movie is that? Well, this one is all about sex, drinking, graduating and all the normal high school senior angst. That means you can expect a dizzying array of profanity and references to genitals. In fact, I think I can safely say that you’ll experience more genital jokes in this movie than any movie you’ve ever seen or likely will ever see. Amazingly that turns out to be a good thing here. Somehow it doesn’t get old. They even close the credits with more of it and people continued to laugh out loud. Well, okay, not the lady next to us who clearly thought Superbad was going to be a slow, deep romantic movie based on her complete dislike of the entire event. At least she hung in long enough to walk out on the credits.

One thing I hope not to forget, so much so that I’m posting it here in an attempt to force it into a permanent location in my head, is the line, “No one’s gotten laid in cargo pants since ‘Nam.” Don’t ask me why that was so funny. You’ll have to see it for yourself in the movie. In context it was hilarious.

If there were any issues to complain about it would be the following:

1) Judd Apatow has to stop pretending that all the geeks have scores of hot women who secretly desire them. This seems to happen in all his efforts. I know it happened for him but that’s the exception and not the rule. If you’re Mrs. Apatow, yes, you’re hot and yes, your husband is a geek. It would be a lot more enjoyable if he’d start insisting on casting women like Alyson Hannigan as we saw her in American Pie. Part of what made that movie the classic that it is is that she was believable as the partner for geeky Jim. She’s cute and adorable. If they used Shannon Elizabeth in her role the entire thing would have been ridiculous. I loved Knocked Up but no one believes the character Seth Rogen played could ever get anyone in the league of Katherine Heigl. Please stop tormenting the rest of us.

2) The casting of Michael Cera as Evan didn’t work at all for me or my friend. This guy came off during the entire movie as gay. He looked gay, he acted gay, he walked gay, he ran gay, he drank gay, he sat gay, he slept gay, he probably may even be gay. And there’s nothing wrong with that except that it doesn’t work here. The entire scene where he had issues with the romantic situation came off as not working not because of his being such a gentleman but because he’s clearly gay! The guy playing McLovin did it entirely right. You believed his immaturity. I guarantee you if his character said to the girl, “I’m sorry I just can’t do this because I’m gay”, everyone in the audience would have said, “I knew it!”

3) There are a couple of spots where the movie drags a bit. We see a bit too much of the police and a few scenes run on a bit past their welcome.

Even with those, the movie is a great deal of fun. It’s certainly no 40 Year Old Virgin and isn’t quite up to Knocked Up but it’s good in its own right and well worth the price of admission.