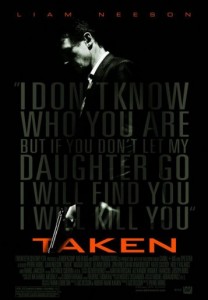 This past week I caught two movies. The first was the much-advertised Taken starring Liam Neeson. Unless you just never turn on a TV then you’re more than familiar with the commercial showing Neeson talking to his panicked daughter hidden under a bed and telling her, “They’re going to take you” just before she’s snatched away by her feet.

The movie does a decent job of laying down the foundation of the storyline and pulling you into Neeson’s world. He’s been a part-time father who wanted to be more and now he’s relegated to trying to parent from an ever-deepening rift. When his daughter announces that she wants to go to Paris Neeson’s character, whose covert CIA work fills him with visions of terrorists at every turn, is dead set against the idea.

It’s right at this point that you might want to leave the theater. The movie isn’t going to get any better, smarter or quicker from here on in. What follows is a story of nearly universal improbabilities and ridiculous plot elements. Neeson also transforms from a meek over-the-hill push-over into the Terminator—able to kill in superhuman fashion at every turn.

I’d have been happier if the captors killed the grating daughter, played by Lost alum Maggie Grace, and the movie then just ran the credits saving us all from the rest of it.