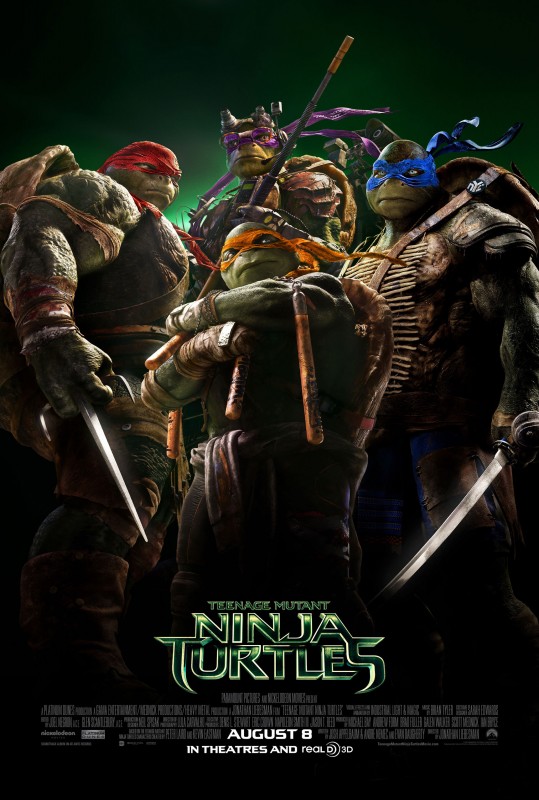 Reboots of franchises can be a good idea if they’re done right. The recent Godzilla is a perfect example of how a reboot can still feel fresh and entertain audiences. I can’t be as positive about the reboot — is this the second or third attempt? — of Teenage Mutant Ninja Turtles to coincide with the 30th anniversary of the original comic book series by Peter Laird and Kevin Eastman. The film has a weird feel somewhere between a straight action movie and the jokey kind of films from the past. The fluctuation between action and humor can be pulled off, but this film just doesn’t manage it. It comes from Nickelodeon Movies, and Michael Bay produced it. Those two influences perhaps give this production its identity crisis. Teenage Mutant Ninja Turtles has elements that I like about the franchise and its characters, yet I still felt underwhelmed overall.

Director Jonathan Liebesman previously helmed Battle Los Angeles and Wrath of the Titans, so he was certainly up for the task of handling stunts, fights and action sequences. Writing team Josh Applebaum & André Nemec (writers of Mission: Impossible – Ghost Protocol and TV series like Alias) and cowriter Evan Daugherty (cowriter of Divergent and writer of Killing Season) collaborated on the script. Although the plot has elements of an origin story built in, the focus is more on what it’s like in New York City with the titular heroes already in operation for some time. A villain called Shredder controls a group known as the Foot Clan, and he wants to take over the city. The humans are powerless, so their only hope is the group of mysterious vigilantes who strike back at the Foot Clan from the shadows. Reporter April O’Neil (Megan Fox) discovers the identities of the vigilantes, and she and her cameraman Vern Fenwick (Will Arnett) assist them in their resistance against Shredder and the Foot Clan in a series of battles. The story doesn’t get much deeper than that summary, and that’s part of the problem. A great or even good plot could have saved the movie. Instead, this is just another example of good guys versus bad guys all over again.

In addition to Fox and Arnett, the human characters are limited to powerful businessman Eric Sacks (William Fichtner), Foot Clan fighter Karai (Minae Noji) and April’s boss Bernadette Thompson (Whoopi Goldberg). Saturday Night Live alumna Abby Elliott is wasted in a role that’s essentially a cameo. Fichtner fares the best as really the top actor in the movie, and I always like to see him in a production, whether it be on TV or on the big screen. The majority of the cast acts in support of the digital characters. Turtles Raphael (Alan Ritchson), Michelangelo (Noel Fisher) and Donatello (Jeremy Howard) have the same actors both voice and perform the characters, but Leonardo (Pete Ploszek) has Johnny Knoxville providing his voice. Similarly, Danny Woodburn (Mickey on Seinfeld) performs the Turtles’ master Splinter while Tony Shalhoub voices the rat. Tohoru Masamune portrays Shredder both outside of and inside his metallic suit.

The best part of the film is that the Turtles, Splinter and Shredder look and act more like the comic book versions of the characters than previous movie or cartoon incarnations. The opening titles use a comic book style, so it’s not so hard to transition from these graphics to the live-action characters. The Turtles and Splinter are not clean and smooth; they have scars and depth to match their gritty, dirty appearances. Shredder still looks and acts like an appliance merged with a samurai. I’m impressed that the Turtles have distinct personalities to accompany their different colors and weapons. Things get annoying with Michelangelo as a kind of surf punk wearing a shell necklace and saying “bro” a lot. Going into the film, I swore that I didn’t want to see the Turtles singing, dancing or rapping as in past movies, so I have to take off points for them making me wince at least once. There is a kind of break with the past, but some of the trademark lines still sneak in or are paraphrased by other characters. The humor is limited to the banter between Turtles, and that’s welcome amid all of the violence. 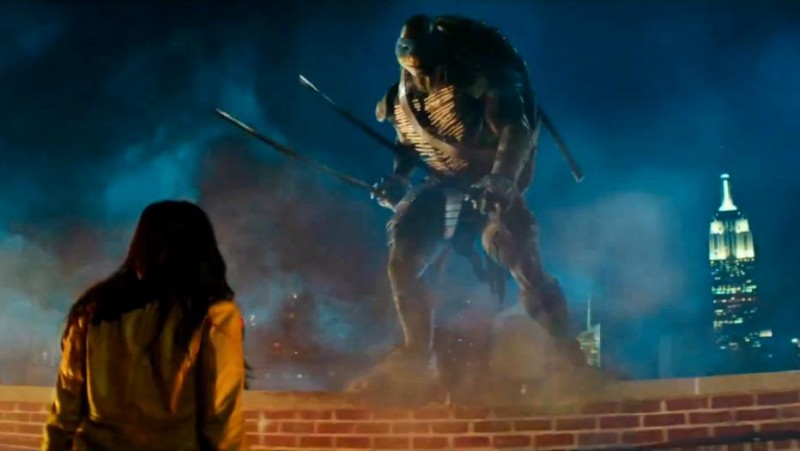 The action sequences are exciting and fast-paced. They drive the plot for much of the movie, and that’s OK if you’re into action and stunts. Unfortunately, many of these scenes are completely over the top and ridiculous. Even genetically advanced Turtles shouldn’t escape some of the situations thrown at them, yet this batch of Turtles makes it through just fine. I found it ludicrous that these stealthy, talented fighters can overpower any enemy in one scene only to get no hits at all on Shredder or other combatants in another situation. Such inconsistencies ruin the believability of the action and the characters. Lengthy fights on a snowy mountain and in Times Square stand out from others in the sewers or on the city streets. The filmmakers took advantage of these picturesque locations, and they add a lot to the movie rather than endless soundstages. True to the “ninja” in their name, the Turtles make good use of their weapons, so they’re not just trappings for show as often happens with action figures.

Teenage Mutant Ninja Turtles gets the action and characterizations right for the digital characters. I wasn’t that impressed with the human characters beyond Fichtner. Arnett just manages a few wisecracks, and Fox looks great but has never really carried a movie with her acting instead of her beauty. I just don’t buy her as an aspiring news reporter. In a summer of big superhero franchises, this one couldn’t afford to try a comeback with a mediocre movie. The production values are good, but with no solid plot to feed off them, it might be better if these Turtles had stayed inside their shells back in the sewer.