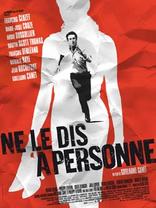 Saw two films this weekend again. The first one is a French movie called Ne Le Dis A Personne that’s marketed here as Tell No One.

The story is about a pediatrician (French star François Cluzet) who loses his wife (Marie-Josée Croze) in a brutal murder and then has to cope with the consequences of it. He has difficulty getting over it and even “celebrates” the anniversary of her death with her parents.

The movie is quite interesting and rather deep. If you see it be prepared to play very close attention. The movie also feels much longer than it is which isn’t usually a good thing. Here’s a very bad thing but, thankfully, it’s about all that’s broken with the film. Had they found a way to tell this with a bit more expediency everyone would have been the better for it.

In the end you’ll be quite compelled by the journey as long as you like a details-heavy storyline.