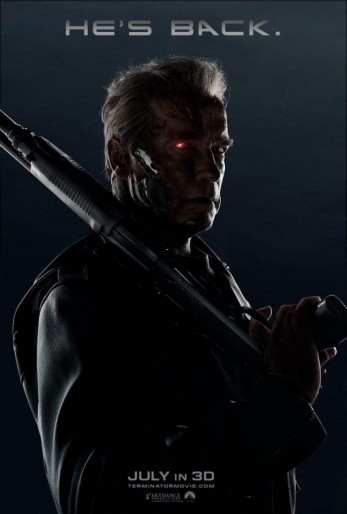 It’s tough to think of Arnold Schwarzenegger and not immediately recall such classic lines as “I’ll be back” or “Hasta la vista, baby.” These two are from The Terminator and Terminator 2: Judgment Day respectively. Although there are lots of other things going on in both films, including buff badass Linda Hamilton, Schwarzenegger is the heart and soul of the franchise as either a good guy or a bad guy. Some producers decided to reboot the franchise, and they smartly included Schwarzenegger in a major role once again. With a major shift that redefines the series, Terminator Genisys delivers more of the same action that you would expect but almost doesn’t warrant the effort with the way that it scrambles time lines. It almost made me question why the franchise came back.

Director Alan Taylor worked on Game of Thrones before jumping to the big screen with Thor: The Dark World. Terminator Genisys is an improvement over his last film, but only slightly. Writers Laeta Kalogridis (writer of Shutter Island) and Patrick Lussier (many editing credits and writer/director of some horror flicks and Drive Angry) scrapped a lot of what happened before in the series. Instead, they stuck with the most basic events before twisting everything around to make a brand-new chapter for the characters that’s supposed to continue into two more sequels. Given some of the missteps in this entry, I can’t imagine two more of them. Hey, I’m open to anything, so we’ll just have to wait and see.

The story mixes old and new for a plot that confuses as much as it jumps around in time. Kyle Reese (Jai Courtney) jumps back in time from a year in which the machines have taken over the world to Los Angeles in 1984. He needs to fulfill his destiny to both protect Sarah Connor (Emilia Clarke of Game of Thrones) and get her pregnant with a child to be named John Connor (Jason Clarke as an adult) who eventually becomes the leader of the human resistance against the machines. Something changes during the jump, and Kyle meets a much-tougher Sarah who has her own Guardian (Schwarzenegger) whom she calls “Pops” to defend her, including against the original T-800 robot sent to kill her in The Terminator. When they learn how a computer operating system called Genisys is about to come online in 2017, they have to jump in time to San Francisco to stop its debut because Genisys is connected to Skynet, the A.I. responsible for the advanced robots and the destruction of the human race.

I was especially impressed with Emilia Clarke and Schwarzenegger. I don’t watch Game of Thrones, so this is my first time seeing her on screen. Schwarzenegger utters some of his memorable lines and tries to establish a few new ones with limited success. Other leads Jason Clarke and Courtney are fine in their roles. J.K. Simmons appears in 2017 as a kind of crackpot police detective, and his subplot that goes nowhere only serves as comedic relief until his character helps our leads on their mission. I hate to see underutilization of a great actor just to add a name to the credits. Lee Byung-hun appears as the new face of a T-1000 that’s sent back to alter events in 1984. He’s exciting to watch, so it would have been nice to have more of him in the movie. The cast does their job to make this time travel nonsense believable. 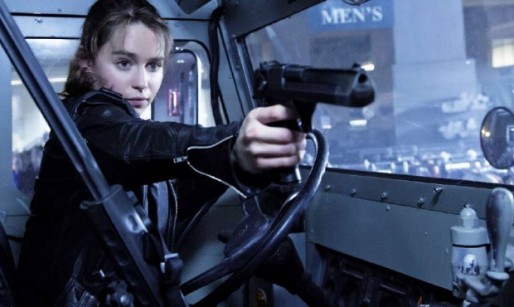 Unfortunately, there are places where the movie comes up short. The title could have just as easily spelled “genesis” correctly because that’s more the message than the name of an operating system. That’s a minor thing. The major problems are with plot and characterization. It’s very distracting to see Emilia Clarke as Sarah when she looks so young and nothing like Hamilton’s version of the character in the same year. A simple change would have made this more palatable. Because the Guardian has been with Sarah since she was a child, why not send Kyle back to an earlier time in her life and resolve the whole pregnancy thing another way? Even worse, the surprise or twist that comes later in the movie is pretty dumb to me in what it means to the franchise and the next two films. Just because you think of something doesn’t mean that you should do it, and this is one of those examples. I don’t think that I can take two more movies of the same plot of trying to stop the machines in different ways. This is why the TV series Falling Skies got stale for me. Good writers need to put a unique spin on things as with the difference between the first two movies.

The special effects are an important element of these movies, and the filmmakers did not skimp on them here. The robot varieties include the T-800 model with the metal endoskeleton that peeks through Schwarzenegger’s skin when damaged as well as the liquid metal T-1000 and more advanced units. There are fights with these robots, but the more impressive scenes are the explosions, crashes and other big stunts. A sequence on the Golden Gate Bridge may just be the best part of the movie. For the first time, moviegoers get to see the actual time travel devices used in the series, and it’s pretty neat to watch the jumps happen. This is a summer action film after all, and the filmmakers deliver the goods in every year of the plot.

It’s exciting to hear the iconic pulse and thumping beat of the theme that defines this series as much as Schwarzenegger’s image. The most welcome part of the film is that they worked Schwarzenegger’s age into the plot. The Guardian’s organic skin ages, so in the scenes in 2017, the Guardian looks like Schwarzenegger really does with gray hair. You have to forget what came before to really enjoy Terminator Genisys. I’d rather not have to adjust my memory to watch a film. If the current filmmakers or another team identify what didn’t quite work with this sequel and adjust it, I can honestly say that I’ll be back. Otherwise, they will have to say hasta la vista to any box office success.