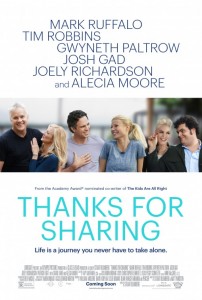 A trio of sex addicts work together to fight their challenging addiction in Thanks for Sharing.

Sex addiction is a very misunderstood issue. There’s not even complete consensus on its validity, with many people believing it’s just an outlet for men to be able to excuse their bad behavior under the guise of a disease. However, regardless of your perspective, one thing is clear: for those who have it, it can be devastating.

The film introduces us to Adam (Mark Ruffalo), an environmental consultant, who’s been “sober” for the last five years. His addiction is very similar to alcoholism in that it demands continual diligence on his part to distance himself from every possible temptation. He can’t have a smartphone, a laptop or even a TV. All of them are fraught with enticements he simply cannot be subjected to. His sex addiction group sponsor, Mike (Tim Robbins), is also an addict, but he has turned his sobriety around by helping everyone he possibly can. A newcomer to the group — Neil (Josh Gad), an emergency room doctor — thinks it’s all a joke and is only taking part in the group to meet a court-mandated requirement because of a recent misstep on his part.

For Adam, everything is under control until he finally attempts to step back into the dating game with Phoebe (Gwyneth Paltrow). Her sexuality and approach are a complete challenge for him, but he’s intent on making it work even when Phoebe makes it clear she’s not interested in dating an addict. Mike, meanwhile, has his own challenges at home. He has an estranged grown son with his own drug addiction that pushed the family to the brink. His supportive, but careful, wife Katie (Joely Richardson) tries her best to keep everything in balance for her husband and for their relationship. Neil is just a complete wreck. His life is coming apart at the seams as he avoids truly dealing with his very real problem. 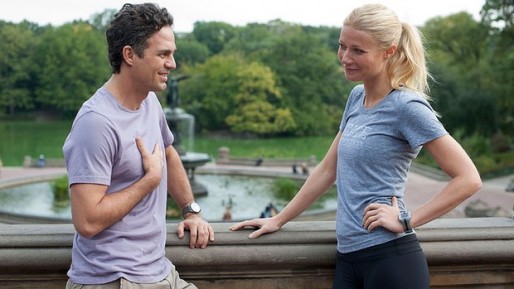 Unfortunately, this is all typical Hollywood fare with no heart. It’s a very flat story with a single, monotonous note that goes on far too long. It does have bigger aspirations but just never connects. By the time it does get to an interesting final act, we no longer care and just want the film to be over.

There are some interesting moments along the way. Paltrow has never looked better and shows off her incredibly fit physique in a way that will have every fan — and then some — squirming in his seat. Gad is the most believable of the group and steals the show. His character also connects with a female addict — Dede, who’s played wonderfully by Alecia Moore aka Pink. It was also good to see Richardson, who always does a solid job.

Alas, this is just a filler film that lacks any of the boundless energy of its characters.