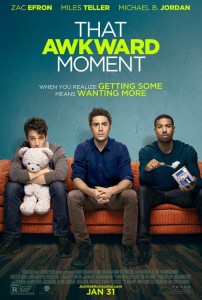 Three unenlightened best friends find it challenging to keep their vow to avoid a serious romantic relationship in That Awkward Moment.

When one of their friends finds out that his storybook marriage is over, the three agree on a pact to swear off all serious romantic relationships. Casual sex is the order of the day, but anything beyond that is strictly off the menu. Of course, almost immediately thereafter, they’re beset by compelling opportunities that force them to reconsider their allegiances.

Serially unattached New Yorker Jason (Zac Efron) runs headlong into the girl of his dreams — the quirky and unconventional Ellie (Imogen Poots). His happy-go-lucky coworker Daniel (Miles Teller) can’t resist a budding courtship with a female friend (Mackenzie Davis). Meanwhile, Mikey (Michael B. Jordan) is back in the sack with his ex-wife. 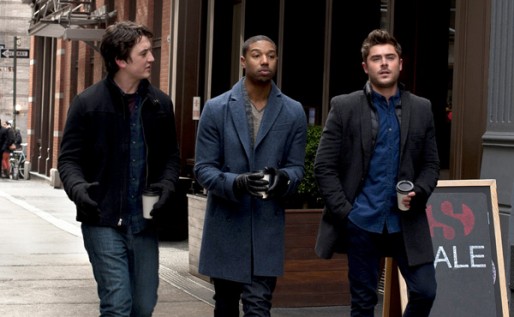 This is the kind of film that makes you wonder if its producers have ever had a single encounter in the real world. Nothing about it rings true. There’s no chemistry among the three friends, and things are only marginally better between the guys and their would-be partners. Jason and Daniel work together at a glitzy New York ad agency that’s apparently run by zombies, and they work alongside a guy named Fred (Josh Pais), whose bizarre personality defies any viable explanation.

There are some laughs along the way, but too much of it centers on over-the-top (and cheap) sight gags, puerile jokes, lots of clumsy references to penises and an endless parade of sexist clichés. Its message, if there is one to be had, is that women will forgive any transgression — no matter how implausibly insensitive — as long as you’re sexy (Efron), cute (Teller) and/or successful (Jordan).

Efron is a total loss who just doesn’t gel with anyone. Jordan and Teller fare much better, but the guys just don’t work as a group.

The strangest thing about the film is that it feels as if it was written entirely from the wrong perspective. While the men can’t seem to get out of neutral, the women own the road. Poots and Davis dominate every scene they’re in. This would have been much more interesting as a girlfriend film. The three of them could have a field day comparing notes about their inconceivably lamebrained boyfriends.

The title even fails to deliver as the pivotal moment is simply the obvious moment. A more honest title would have been Those Awkward 94 Minutes.