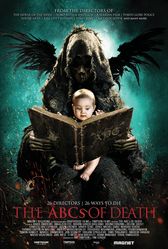 Anthology films win or lose based on the wide variety of the segments and the expectation that there will be some real gems in with the inevitable duds. If you watch such a film with those assumptions in mind, you probably won’t be disappointed. I’m a huge horror fan, so when I heard the title The ABCs of Death, I had high hopes for this film. When I learned about the concept, I took my own advice and kept my mind wide open for the onslaught of horror to come. Sadly, I’m not nearly as enthusiastic afterwards as I was going in. The ABCs of Death suffers from its own ambition and weak submission and approval processes that would have weeded out some truly awful segments. As expected, there are some wonderful segments, too, but they’re so few and far between that you’ll wish that the anthology used the Hawaiian alphabet instead of the full English alphabet.

Producers Ant Timpson and Tim League devised the format of The ABCs of Death. They challenged 26 directors from 15 different countries to take one of the letters of the alphabet given to them and create a short horror film in which the letter stands for a word that relates to the content of the short. The tagline for the film is “26 Directors — 26 Ways to Die.” 25 of the directors were chosen, but the 26th director (Lee Hardcastle) won a contest for his spot. Most of the entries are in Spanish, Japanese or English, so there’s a good international flavor to the works even if that flavor is mostly bland. The biggest problem with the collection is that there are 26 entries. Unlike the Sue Grafton novels that are named with a similar technique, it’s difficult to take serious some of the entries like F is for Fart, M is for Miscarriage or T is for Toilet — the last from esteemed contest winner Hardcastle. After an opening segment in which children’s letter blocks are covered with blood, each segment plays out without introduction, and you don’t learn the title until after a transition of the final scene to an all-red screen upon which the title appears. One could argue in support of this approach, but I prefer to know at least the title of a short and maybe the director or stars before I watch it.

I had high hopes for the other 25 letters after A is for Apocalypse from writer/director Nacho Vigalondo. While the city burns outside the bedroom window in an apparent apocalyptic event, a woman tries a variety of ways to kill her husband. There are some really good special effects here, including the splitting of the man’s fingers with a knife. Blood and gore aren’t always the best way to create horror, but they pop up in almost every segment of The ABCs of Death. Such things should punctuate or amplify the plot instead of just appearing as cheap gags. Sadly, the best of the segments is also the only one other than A is for Apocalypse that I truly enjoyed. Writer/director Marcel Sarmiento delivers a wonderful short film called D is for Dogfight that contains horror, cinematic flourishes, a full story, a satisfying ending and creative edits and camera work. A fighter (Erik Aude) takes part in a dogfight with an old, vicious dog let loose after straining on a chain. The dog bites the arm and the leg of the fighter in two scenes that are difficult to watch because of their expert artistry involved. A twist complements the amazing dog work. If every segment were even half as good as D is for Dogfight, this would be a glowing review. It’s no surprise that the producers used this segment to promote the anthology. Talk about a bait and switch!

Two segments that I should also mention — mostly for their irreverence — are unique in that they basically don’t know what to do with the anthology’s format. Writers/directors Adam Wingard and Simon Barrett can’t think up a good “Q” word in Q is for Quack. They decide to kill a duck, but the shots go wild with unintended consequences. Writer/director Jon Schnepp also doesn’t know how to use “W” in his film. Rather than turn it into comedy, he produces W is for WTF!, an animated short full of crazy edits that suggests all kinds of “W” names for a film. Neither of these segments excited me as much as D is for Dogfight. In fact, after the letter D, everything went downhill.

There are a couple of shorts that use a first person perspective to try to elicit horror. One is bad and pretty nebulous, and the other almost works. G is for Gravity from writer/director Andrew Traucki is very short and very disappointing as it details the last actions of a drowning surfer. U is for Unearthed from writer/director Ben Wheatley similarly shows the last minutes of a life… or death. A vampire is chased down and killed by an angry mob. This short would have benefited from a longer chase or some more fighting with the mob.

For some odd reason, the shorts by Japanese filmmakers are exceptionally strange and awful. Maybe that’s their approach to horror over there, but it can stay there if the following segments are the result. The aforementioned F is for Fart comes from writer/director Noboru Iguchi. An earthquake releases poisonous gas that kills everyone, but a young girl would rather die from the fart gas of her beloved teacher instead. Maybe F is for WTF! Writer/director Yudai Yamaguchi shows a variety of crazy facial expressions of a dying man in J is for Jidai-geki, an expression that refers to a genre of film, television and theater that involves sword fighting. Writer/director Timo Tjahjanto really pushes the limits of taste with L is for Libido, a rather sick “competition” among masturbating men in chairs to see who can find excitement in a succession of people who are less desirable than the ones before. The final short of the anthology is Z is for Zetsumetsu, a word that means destruction or extinction. It is a rather awful mix of graphic nudity, phallic symbolism and abstract images. Writer/director Yoshihiro Nishimura did not take advantage of his final place in the anthology to deliver something good; his work instead leaves a bad taste in your mouth for the entire film.

I’ll avoid talking about the animated turd in K is for Klutz, but contest winner Hardcastle uses clay animation to tell his tale of a killer toilet and the boy who is afraid of it in T is for Toilet. The animation and humor are good, so the bathroom scene doesn’t completely disgust as much as K is for Klutz. Another batch of films indulges in blood, gore or both, including X is for XXL, R is for Removed and the aforementioned M is for Miscarriage from writer/director Ti West, who also was writer/director of The Innkeepers. A woman has trouble plunging her toilet until it’s revealed what’s blocking it up.

Just to make sure I don’t skip any of the letters, I’ll at least list the remaining shorts: B is for Bigfoot, C is for Cycle, E is for Exterminate, H is for Hydro-Electric Diffusion, I is for Ingrown, N is for Nuptials, O is for Orgasm, P is for Pressure, S is for Speed, V is for Vagitus and Y is for Youngbuck. Writer/director Kaare Andrews uses his infant son in the ambitious but flawed V is for Vagitus, and his son is also the cover model for the poster. With all of these segments, it’s no surprise that the end credits take 10 minutes to scroll by. I doubt many of you will have the patience to sit through them. The ABCs of Death could have been a cult hit with a little bit for everyone. Instead, it underwhelmed me and made the film so agonizingly slow because I knew how many letters were left. Sadly, I knew my ABCs.