A neighborhood thug from a town in Scotland gets one final chance to redeem himself and decides to make the most of it when a life-preserver, in the most unlikely form, is presented to him in The Angels’ Share. 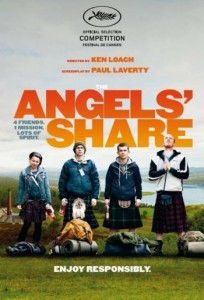 Famed British director Ken Loach‘s new film won the Jury Prize at the latest Cannes Film Festival giving us another film in his trademark style. Angels’ Share introduces us to Robbie (first time actor Paul Brannigan) — a small-time hood who’s been caught for the umpteenth time going afoul of the law. His barrister pleads for one last chance now that his girlfriend Leonie (Siobhan Reilly) is pregnant with their first child. Sentenced to community service, Robbie does his best to turn over a new leaf and befriends the older director of the work detail, Harry, played  by John Henshaw (most recently memorable as the disgusting womanizer who tried to land Mrs. Patmore in Downton Abbey). Harry takes Robbie under his wing and introduces him to the culture of finely crafted whisky.

The rest of the story focuses on the various challenges of Robbie’s attempt to break free from the only life he’s ever known and the seemingly permanent hold it has on such people. The acting is superb across the board from the first scene to the last. Brannigan is crucial to the story and his being able to convey Robbie so deftly in his first acting role is nothing short of amazing. He comes off as a true industry vet and clearly has a future in the acting trade. The supporting cast also does an excellent job most notably Robbie’s inner circle of unlikely friends.

The look of the film is exactly what’s called for with a very muted video-like quality that lets us feel Robbie’s darkness. However, the soundtrack does virtually nothing to help the effort with the exception of one vignette involving the overused I’m Gonna Be (500 Miles) from The Proclaimers.

The plot bogs down a bit in the middle and starts to push the boundaries of believability along the way. Some of the latter sequences feel too simple and contrived and the ending provided a resolution that was far too easy. However, it’s still a solid film with some genuinely funny scenes and a good mix of reality and affirmation. Viewers should also be prepared to jump to subtitles as the Scottish accents are often indistinguishable from English.