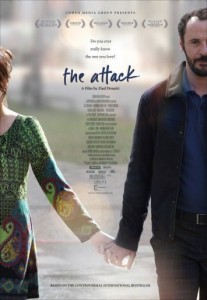 The conflict between Jews and Arabs has been going on for so long that problems are just expected and dealt with on a daily basis in Israel and elsewhere in the Middle East. Such friction is made even worse when a trusted citizen becomes the target of hatred and prejudice after events that implicate him in hostile actions despite his innocence. That’s the focus of The Attack when a bombing is perpetrated by an unexpected terrorist and the family members left behind are stuck with the aftermath. This is a compelling film from the opening segment to the nebulous ending. I just wish that it had more depth in some areas.

Cowriter/director Ziad Doueiri (cowriter/director of Lila Says and writer/director of West Beirut) had a tough experience in filming and releasing The Attack. It’s a French financed film with the original title L’Attentat, and it has been banned in almost every Arab country because Doueiri actually filmed parts of the movie in Israel. Cowriter Joelle Touma (cowriter of Lila Says) and Doueiri adapted their screenplay from the controversial 2006 novel by Yasmina Khadra, a female pseudonym for male novelist Mohammed Moulessehoul, who was a former Algerian military officer before entertaining writing. There are many layers to this story, but at its heart, it comes down to the two halves of a marriage and the secrets hidden therein.

Amin Jaafari (Ali Suliman) is a successful Palestinian surgeon who lives and works in Tel Aviv. He and his wife Siham Jaafari (Reymonde Amsellem) are clearly in love as shown in the opening scene in which the two share tender moments and Siham confesses that a part of her dies every time they separate. This comment is more than prophetic because it’s no spoiler here that Siham is the cause of a bombing in a restaurant that leaves 17 people dead, including 11 children there for a birthday party. The film goes on to introduce us to Amin as he receives a prestigious medical prize — the Oscar of his field — without Siham by his side at the ceremony. The Jaafaris have many friends in Israel and, over the years, have become assimilated into Israeli culture as much as possible. It comes as a complete surprise to Amin that Siham entered that restaurant as a suicide bomber, especially heartbreaking considering that Amin tended to the many hurt victims at his hospital.

The Attack spends perhaps too much time in Tel Aviv before the more interesting and important part of the movie kicks in. Amin’s security friend at the hospital, Raveed (Dvir Benedek), tries to lessen the blow of Amin’s compulsory interrogation by Captain Moshe (Uri Gavriel) of the Shin Bet, the Israeli secret service. Unfortunately, Moshe thinks that Amin is somehow involved with his wife’s actions. The only person who really believes in and trusts Amin is fellow doctor Kim (Evgenia Dodina), a friend who I suspect has feelings for Amin in the novel — a subplot not explored here. The Attack is mostly a personal journey for Amin as he investigates why Siham committed this terrible act and journeys to Nablus in the West Bank to search for the truth. Amin grills his nephew Adel (Karim Saleh), who made many visits to his house, and ultimately looks to a Christian priest (Ramzi Maqdisi) for closure. 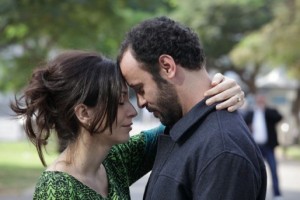 I was impressed with the story because of its unusual perspective for Israeli-Palestinian films of the bomber’s family instead of the victim’s. This is a very difficult subject for people from that region much like the effects that The Troubles have on citizens of Northern Ireland on both sides of that issue. In addition to the possible romance between Amin and Kim, I would have also liked more of a mystery approach to Siham’s past. Amin seems to come by the facts about Siham a bit too easily for someone who hid her plans and activities from him for so long. Regardless of any weaknesses in the plot, Suliman and Amsellem inhabit their characters completely; we really feel Amin’s anguish as he learns such horrible things about Siham for the first time. Suliman’s strong work is crucial to accepting the film’s premise and the twists and turns of the plot. The scenes of Amin tearing down posters in Nablus with Siham’s image as a martyred hero are some of the most powerful.

It’s hard for us as Americans to really understand the complex feelings raised by the issues of The Attack. The closest that American filmmakers got to this kind of topic were a number of films that looked at the impact of school shootings on the families of the shooter. Beautiful Boy with Maria Bello and Michael Sheen comes to mind. The prejudice and false accusations directed at Amin have also appeared in various forms, most recently with allegations of sexual abuse in The Hunt. There have been so many films made about the conflict between Jews and Arabs that it’s hard to offer anything new. The Attack takes a huge step in that direction and presents enough material to generate some serious discussions on how these people can someday live side by side as neighbors.