This past weekend I owed a friend a favor after having drug him to several independent films that he found a bit challenging to sit through. He’s very much a more mainstream type of movie guy. He wanted to see Marvel‘s The Avengers and given its stellar reviews I figured I didn’t have much choice but to say yes.

Do you sense that I’d have preferred not to see it? If so, you sense correctly, but why would I want to pass on it? Well, I’m one of those who seem to be starting a notable trend. I’m not a comic book fan but I tend to enjoy the first entry of most of the comic book films. They have detailed back stories. They tend to involve ordinary people who are transformed into something above and beyond. That’s what I find so fascinating. The rest is just a bunch of effects and action sequences for me and much of it is, in my view, overdone. 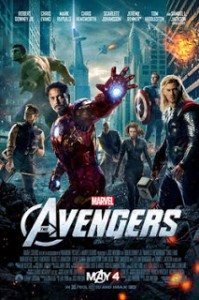 This isn’t a first chapter but is, in fact, a culmination film tying together several characters into one story. Most of the main characters have had their own films (or even film franchises) before this one. There have been films for Iron Man, Captain America, The Incredible Hulk and Thor with other characters appearing prominently in some of these.

The main problem is I’d only seen Iron Man and Iron Man 2 (and not surprisingly only liked the former). The big concern was if this film would almost require one to have seen the other films. Thankfully, I can say that wasn’t the case though it certainly would have helped.

Before I forget, we ended up seeing the film in 3D but I must say it seemed pretty unnecessary and the effect was minimal throughout. I’m fairly certain seeing it in 2D would suffice.

The first thing I found interesting were the characters of Thor and Loki. Both are from Norse mythology and are brothers. Thor is the “good” one and Loki is the bad one. Loki is the main antagonist of the film. However, they don’t seem to fit the story like the others. They just seem entirely out of place and distracting in nearly every scene. I wonder about the origins of their inclusion in this tale.

The story itself is rather nicely done and keeps the viewer engaged. The action sequences are, quite impressively, not overdone. That doesn’t mean there aren’t a lot of them because there are. It just means that they don’t feel ridiculous or done as if they’re being viewed on fast-forward (like what you find with The Transformers films). What was most surprising was the well-scripted humor. The film manages to fit in some really effective comedy at perfectly-timed points. This too is handled with a sense of balance. This doesn’t become a parody of itself but still finds time to be very funny.

I also found the soundtrack noteworthy in many places. It added to the experience just as it should have moved out of the background only when it should have.

On a down note, the women of the film seemed pretty pasted in. There isn’t much here for Scarlett Johansson‘s character to do and, as a result, she just sort of skids through the film. Gweneth Paltrow is here but seemed added only to get a bit more star power on the menu. In fact, she was also a bit distracting because she looked very, very gaunt on old in almost all her scenes. She’s at the stage of life where a little more weight would make her look much better.

For me the star of the show was Robert Downey, Jr. as Tony Stark, aka Iron Man. He steals virtually every scene he’s in and just seems head-and-shoulders above everyone else around him. This film just loves everything about the guy.

In the end it was an enjoyable experience but nothing all that special. It’s fun, entertaining and not a waste of a ticket but I doubt it’ll be listed as one of the top films of the year.