A nefarious villain plans to gain entry into elite society by exterminating the creatures dwelling underground in the town in The Boxtrolls.

The town of Cheesebridge lives in fear of flesh-eating monsters called Boxtrolls who, as their name suggests, wear discarded boxes over their ghastly figures to more easily hide among the town’s refuse. Each night, the Boxtrolls emerge from the depths of the town’s sewers to hunt its unfortunate human inhabitants. The desperate town leaders incentivize an ambitious, power-hungry exterminator to rid the town of this unacceptable scourge by promising him what he wants most. Once the last Boxtroll is eliminated, Archibald Snatcher (voiced by Ben Kingsley) will be given a highly-coveted white hat and a seat at the leader’s exclusive cheese tasting table.

The Boxtrolls, meanwhile, are entirely misunderstood. These highly resourceful and creative creatures live quietly beneath the streets doing whatever they can to survive. They hold no ill will toward humankind and have never caused harm to any of them. In fact, they’ve even adopted a young human boy called Eggs (voiced by Isaac Hempstead-Wright), whom they’ve taken care of and loved since his infancy. When young Eggs runs into rebellious Winnie (voiced by Elle Fanning), the daughter of the town’s leader, he quickly realizes that he’s his family’s best hope for survival. 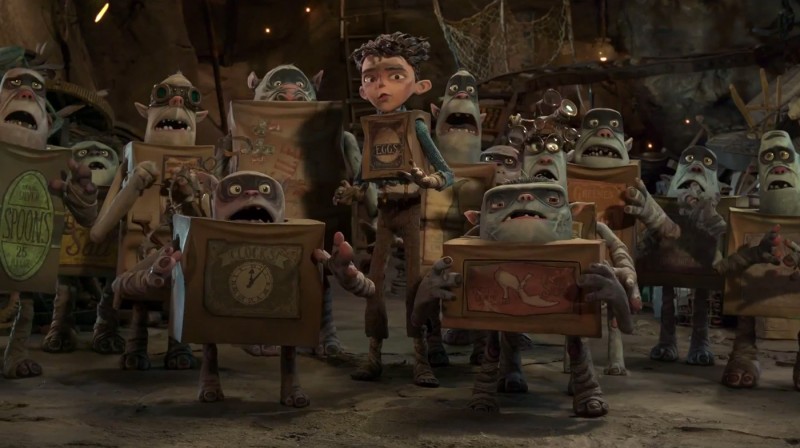 This Tim Burton-like, stop-motion, animated tale is loosely based on the book Here Be Monsters! by Alan Snow. Although it’s an American production, the characters, accents and dialogue are heavily British. This is one that immediately captivates the viewer. The people of Cheesebridge are quite interesting in their own right, but the Boxtrolls make the film. They’re not only quirky and curious, but they are also downright adorable. Their plight is one that viewers of all ages will immediately connect with.

Very young viewers may find the perpetually dark overtones and initially scary Boxtrolls a bit scary, but most will immediately recognize that it’s all just one big misunderstanding. The Boxtrolls, after all, are the good guys. The film is loaded with first-rate voice talent, including Simon Pegg, Nick Frost, Tracy Morgan and Toni Collette. The visuals are endlessly fascinating with an understated sense of humor that’s just right for the material.

Unfortunately, the biggest surprise for a film with such an enjoyable beginning is that it loses steam in the middle before grinding along to a very slow, mainly forgettable and entirely predictable ending. Along the way, viewers will find some nice lessons, a few touching moments and some of the cutest monsters ever put on film.