Veteran 911 operator Halle Berry is pushed to the breaking point, along with the audience, when she takes The Call.

This is the latest thriller from director Brad Anderson who last kept audiences on the edge of their seat with his 2008 tension-inducer, Transsiberrian (though I wasn’t one of them). 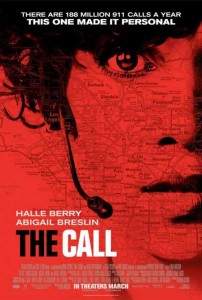 The Call focuses on Jordan Turner (Berry) — a well-versed and polished 911 emergency operator who finally receives the call every such operator must dread. It leaves her reeling and broken, forcing her to get off the front lines and retreat to the safer environs as a call center trainer. Fate has other plans for Jordan when a co-worker doesn’t seem able to handle a sensitive call forcing Turner to face her fears while trying to do all she can to help a new caller (played by Abigail Breslin).

The Call has all the pieces for a first-rate thriller and that’s actually a much more apt description than it might seem. The movie very much feels like a hodge-podge of literally half-a-dozen other thrillers and horror films. Most obvious are several scenes that will instantly have you thinking of Silence Of The Lambs. However, the reconstitution loses something in the process leaving a bit of a messy ending as a result.

The psychopath here is played pitch-perfectly by Michael Eklund. Everything about his portrayal will have your skin crawling in no time. Unfortunately that’s the high-water mark for the acting. Berry and Breslin are both fine but there’s just not much in the way of any sort of character development. People keep acting like cardboard cutouts including a town car driver played by Michael Imperioli who must really need the money. In fact, it’s his character that breaks quite a bit of the tension along the way with several “seriously?” moments that really aren’t needed.

The ride is still a wild one that did keep everyone in the theater at the highest levels of tension and that’s worth quite a bit. Several times you’re certain the film’s going to go “Hollywood” and it just manages to keep the pressure on instead — that is, until the final act which is sure to be a hit with some and a complete sigh of disgust from others.

This is likely to be viewed as no Transsiberian by fans but it’s also not a wasted view if you’re a tension junkie.