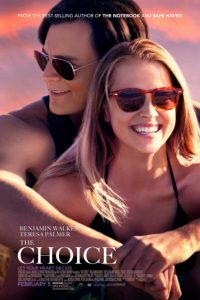 An unlikely, passionate summer fling turns into a deeper, lasting romance in The Choice.

Travis (Benjamin Walker) is a bit of a lothario. Women usually find themselves captivated by his rugged good looks and disarming Southern charm, and he’s more than well aware of it. That all changes when a young medical student, Gabby (Teresa Palmer), moves in next door and seems unfazed by his normal stock-in-trade. For the first time in his life, Travis is the moth drawn to another’s flame.

Gabby finds Travis’s advances transparent and simplistic. She’s involved in her own long-term relationship with a hunky doctor (Tom Welling) from the local hospital who comes from a well-off family. To her initial view, this slick hick is playing entirely out of his league. Fate intercedes when her dog comes down with an affliction that requires a trip to the vet and a surprise that she never anticipated.

Despite their differences — and Gabby’s better judgment — the two end up in the deep embrace of a passion-filled affair. As their feelings for each other blossom, the choices they face become larger and more serious. Will they make the right calls?

The first thing to know about this film is the last thing that you need to know about it: it’s based on a novel of the same name by Nicholas Sparks. His film treatments over the last decade are every bit as banal as Wes Anderson‘s films are quirky. The entire first third of the film is dominated by the gratuitously good-looking leads and their ample assets. It’s also marked by performances every bit as bad as they are attractive, and boy, are they attractive. Walker and Palmer are easily outclassed by the yeoman’s work of their two equally beautiful dogs. Walker feels every bit like Matthew McConaughey lite. According to what we see on screen, Palmer’s casting seems entirely driven by how much cleavage she could show in her swimwear. Such choices openly clash with the story’s heavy family-values overtones.

The most surprising shock of the film is the appearance of Tom Wilkinson as Travis’s small-town father. It’s like finding an errant rose sitting conspicuously atop a huge pile of manure. I can only hope that Wilkinson doesn’t need the money this badly.

The script is as predictable as they come and as genuine as a three-dollar bill. Several plot points tease us with the potential of taking the road less traveled, but return to their courses with the same indifference of a trolley following its predetermined tracks. You’re better off walking. The scenery anywhere outside the theater is bound to be more interesting. 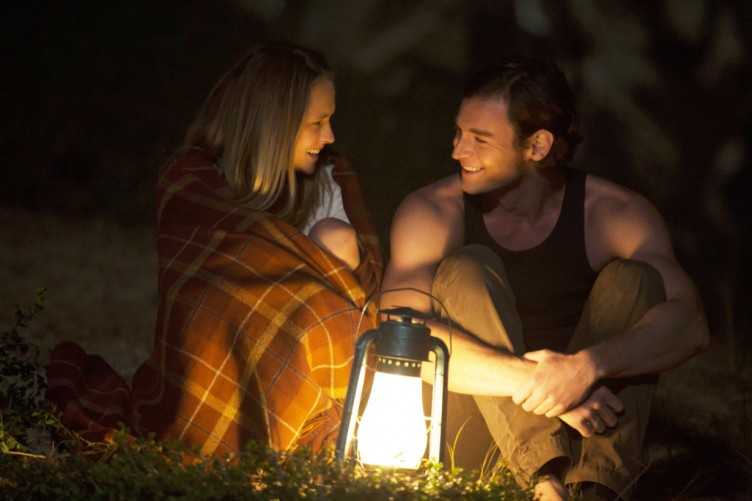