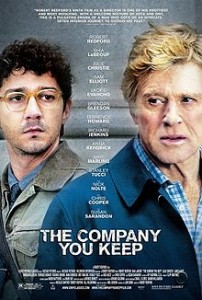 Enough years have passed since the ‘60s and ‘70s that many of the radicals, war protesters and antiestablishment groups have mellowed out, grown up or simply lost their drive. The members of the Weather Underground were more extreme in their actions and motivations in that they committed acts of violence and vandalism that would be considered domestic terrorism today. A neat premise for a film is how members of this group have been in hiding for a violent crime and are flushed out when one of their own can’t live with the lies any longer. The Company You Keep starts with that premise and expands beyond it to merge drama, secrets and a man on the run for a captivating film that explores tricky issues.

The Company You Keep is the ninth film directed by Robert Redford, the last one being 2010’s The Conspirator. Writer Lem Dobbs (also the writer of Haywire and The Limey) based his screenplay on the novel by Neil Gordon. Redford is known for being politically active, so it’s rather appropriate that he also plays the lead in a story that shows how someone has to face the results of his youthful actions years later. The expectation might be that Redford skews the film to the left politically, but I found it to be rather fair to both sides of the issues. It’s more important how Redford attracted and assembled an amazing cast, even in supporting roles, to portray a wide range of characters that are anchored by two men in search of some information to save their skins.

Jim Grant (Redford) is a public interest lawyer in Albany, New York, and a recent widower who looks after young daughter Isabel Grant (powerful singer Jackie Evancho, credited as “Jacqueline” here). When former Weather Underground member Sharon Solarz (Susan Sarandon in just a few scenes) essentially sets herself up to get caught by the FBI for her participation in a ‘70s bank robbery that turned to murder, she sets in motion a series of events that later reveal Grant to also be in hiding for that same robbery. Dogged, cocky reporter Ben Shepard (Shia LaBeouf in one of his best roles) of the Albany Sun Times goes to Grant to ask him about turning down Solarz’s case and instead discovers through interviews and investigation that Grant is really Nick Sloan, also wanted by the FBI along with Solarz and Mimi Lurie (Julie Christie). When Ben exposes Grant, the lawyer goes on the run, and Ben heads out on the road to track him down and discover the truth about Sloan, Solarz, Lurie and their company of friends as well as dig up a few personal secrets. Grant is looking for someone or something to clear his name, and Ben wants that one great story to establish and/or save his journalism career.

The Weather Underground was a radical offshoot of Students for a Democratic Society (SDS) who thought that they could stop the war in Vietnam and other injustices by bringing violence and unrest to American soil. Although the case in this film is fictitious, there were certainly members of the Weather Underground who were brought up on charges as varied as arson and murder. I knew a member of the group who passed away recently, and I would have loved to watch this movie with her before talking to her about her activities and associations. The Company You Keep is really that fascinating and interesting. Redford has helmed movies with a variety of subjects. The story and pacing were right on target with this one — certainly better than The Conspirator or 2007’s disappointing Lions for Lambs.

Redford does some of his finest acting here, which is not always the case with someone of his talent doing double duty. LaBeouf hasn’t always been able to show his acting chops when he’s mostly looking at green screens in the Transformers series, so it’s nice to see him sustain a movie as he does here. The supporting actors cover the decades and make impressions even in their small scenes, including former Weather Underground associates played by Sam Elliott, Richard Jenkins, Nick Nolte and Stephen Root. Stanley Tucci frowns a lot as Ben’s annoyed editor, and Terrence Howard and Anna Kendrick head up the FBI effort to find Grant. Brendan Gleeson, Brit Marling and Chris Cooper have more prominent roles, and fans of Once Upon a Time and Bates Motel will recognize Keegan Connor Tracy as Grant’s secretary. Despite the glut of stars in these small roles, I didn’t feel like it was stunt casting on Redford’s part. These actors each fit their roles nicely — from Nolte’s gravelly-voiced construction company boss to rising star Marling’s college student.

I was impressed with many of the details of the film that Redford certainly influenced or included. For example, when Grant goes on the run, he puts on an old leather jacket from his Weather Underground days and keeps that on for the chase almost like his old persona. The music by Cliff Martinez effectively reflects the tension and drama of many of the scenes with single extended notes as well as an occasional melancholy sequence for some of the sadder moments. Some of the discussions later in the film clear the air for the characters but don’t diminish the impact of their actions that were unresolved. The reflection on the past by the main characters lingers far after the end of the film. College professor Jed Lewis (Jenkins) expresses this best when he says, “Now we’re just a story told to children.” If we have to wait a little bit longer for a film of this quality from Redford, then it’s worth it. The Company You Keep touches upon what’s most important in life as it reconciles past ideals with the present reality of lives that still have purpose.