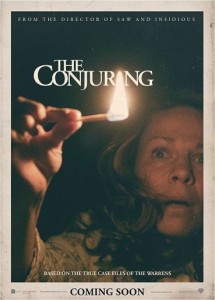 Great horror films are rare these days, and ghost stories are even rarer. The most memorable ghost story in recent years is The Orphanage by director J.A. Bayona and writer Sergio G. Sánchez, who were also the director and writer of last year’s The Impossible. It’s hard to get chills just right in a movie, and The Orphanage did it. The Conjuring has many problems and clichés, but it still somehow manages to rise above the schlock that’s passed off as horror these days. It’s certainly entertaining — best seen with a large audience — but don’t expect an original masterpiece. The Conjuring is probably as good as you’re going to get for a while.

Director James Wan has had at least two good, solid films as a director with Saw and Insidious. The former was clever, bloody and fun before the series got out of control, and the latter is actually a better film than The Conjuring. Cowriters Chad and Carey Hayes wrote the remake of House of Wax and The Reaping and were cowriters of Whiteout. The filmmakers would have been better off if they had come up with an original idea rather than steal concepts, scares and elements from other modern horror flicks. Instead, there’s the ridiculous assertion that the events are based on a true story. If that doesn’t irk you, the title will because there’s no conjuring going on here. I guess someone thought the title sounded cool and used it even though it doesn’t represent the movie at all.

The only connection to the real world is the presence of two of the main characters, Ed Warren (Patrick Wilson) and wife Lorraine Warren (Vera Farmiga). These paranormal investigators did look into a variety of cases in the ‘70s, and this film is supposedly based on one case that really spooked them. Lorraine is still alive, and she served as a consultant on the film. My guess is that they probably involved her in the production of the movie so that she wouldn’t say how silly it is to use the argument that it’s based on a true story. A prologue set in 1968 serves as an introduction to the Warrens and what they do. They retrieve a possessed doll named Annabelle and place it in their storage room. This collection of haunted or bad items strongly reminded me of the antiques shop in Friday the 13th: The Series or, on a grander scale, the titular location in Warehouse 13. The prologue really sets the tone for what’s to come; that doll is one nasty little creature.

The main story takes place in Harrisville, Rhode Island, in 1971. You know it’s 1971 because of the long sideburns on the guys and the static on the television late at night. Trucker Roger Perron (Ron Livingston) and housewife Carolyn Perron (Lili Taylor) move into this large home for a new beginning. They have five daughters: Andrea (Shanley Caswell), Nancy (Hayley McFarland), Cindy (Mackenzie Foy), April (Kyla Deaver) and Christine (Joey King). The adorable King was most recently seen in Oz The Great and Powerful and is currently also in White House Down. At first, small things happen like doors opening and strange sounds emanating from nowhere. These events grow in both frequency and menace such that the Perrons call on the Warrens to cleanse their house of whatever bad spirits are hanging around. The Warrens somehow have supernatural powers and can sense things that we mere mortals can’t, so they get such a bad vibe from this place that they really want to have nothing to do with it. The Conjuring “borrows” heavily from The Amityville Horror, Poltergeist, The Exorcist and probably about a dozen other horror films. Your enjoyment of the movie depends a lot on how many genre films you’ve seen over the years. From screeching, bleached-white bodies to loud sounds designed to make you jump, it’s all in there. Despite the familiar elements, Wan somehow makes the movie fun and polished.

I’m not going to say too much about the specifics of the scares in The Conjuring because that would ruin the only good thing it’s got going for it. It somehow pulls off a few good spooky moments despite being derivative, unoriginal and too reliant on “boo scares” or “jump scares.” These are moments in which sound effects or suddenly appearing objects or persons combined with sound effects catch you off guard. It’s like when someone opens a refrigerator door and closes it to reveal a person suddenly standing there. I find this type of horror cheap and only occasionally effective. Even worse, the trailer ruins one of the best moments in the film during the Hide and Clap game that Carolyn and her daughters like to play. The Perrons and the Warrens are dumb as far as movie characters go, too. They do stupid things like go in the basement when it’s dark and investigate strange sounds and sights by themselves. There are silly plot holes like the basement that’s closed off from the rest of the house being the only place to turn on the furnace and heat the house. Also, how many movies have birds flying into the side of the house and killing themselves? Enough already! The scary parts do increase in intensity, so by the time the finale kicks in, you will likely be on the edge of your seat.

The Conjuring has plenty of things to make you roll your eyes as well as jump out of your chair. If you’re a 16-year-old high school kid out with your friends, you’ll probably love it. If you’ve seen as many horror films as I have, it’s more like a walk down memory lane. The cast is good, but this movie isn’t about actors. It’s about scary spirits and noises, so as long as the actors get out of the way and react believably to the frightening things, they’re fine. Ed compares a bad spirit to gum stuck to your shoe. It follows you around and is tough to scrape off completely. It won’t be that hard to shake off The Conjuring. In about two months, the Halloween offerings will come out and put this movie completely out of your memory. If you want to try something that lingers a bit longer, try Wan’s Insidious instead.