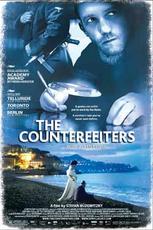 Three of us took in the foreign film, The Counterfeiters last night. It’s a German-language film that tells the true story of a select group of Jewish prisoners in a Nazi concentration camp. These prisoners are spared a trip to the gas chambers to take part in a more covert engagement. The Nazi’s plan to destabilize the economies of the allied countries by printing massive amounts of counterfeit pounds and dollars. The captors have selected each of them due to their expertise in document creation. That skill is the only thing keeping them alive.

The movie got another rating in the 90s on Rotten Tomatoes. I’ve spoken several times about my concerns with such movies. Scores that high are usually more about selection bias than universal appeal. I can certainly see why some found this to be a winning effort. The acting was superb. All the camera shots were great. The cinematographer was first-rate. The costumes were flawless. However, the story was pretty flat and dull.

There are a scant few scenes where you’re pulled into the story and then the monotone plot drones on almost immediately again. A couple of the scenes are problematic. For example, there’s a scene where the main character is suddenly, without explanation, whisked out of camp and taken to the home of the German officer running the project to meet his kids, his gushing wife and to drink his liquor. Okay.

The music was also a problem. There’s often inane French music that’s as inappropriate as a gansta rap soundtrack playing over Casablanca. I swear at one point they had circus music going as someone was killed.

So, we’re now three months into the 2008 film season without having seen a decent film.