Dramatic climate change suddenly threatens the existence of a solitary caveman family in the new animated film from Dreamworks—The Croods. 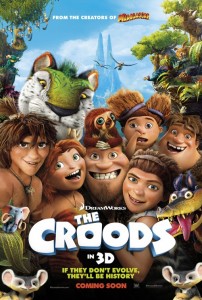 The main plot of The Croods is pretty typical in that it takes current day aspects of everyday life and pastes them onto a Paleolithic family. The father, Grug (voiced by Nicolas Cage), is obsessed with keeping his family safe, which of course, is a much bigger challenge when virtually everything could get you killed–most notably, curiosity. The family has experienced no shortage of close calls and witnessed the graphic passing of all of their neighbors. On the other end of the spectrum is Grug’s teenage daughter Eep (Emma Stone) who, just as predictably, finds every fatherly rule a bore. She longs to stay out late, escape the confines of the cave and, essentially, drive her parents to an early grave.

The look of the film changes heavily over the course of the story. Initially it feels bland a bit flat, by design and rightly so, until the family embarks on an Oz-like journey into new lands. Then the palette shifts providing a much richer, deeper look adding a sense of adventure and wonder to the experience. The characters themselves are well done though they seemed (at least to me) very much based on those crazy troll dolls that all sport entirely vertical pastel hair. The strangest thing about them is that most have eyes that are just too big for their heads. It’s as if half the family is suffering from thyroid conditions.

Much of the early story feels like a video game. In fact, several of the sequences felt entirely contrived to tie into said obligatory titles to come. You’ll know each of them the instant they start up as the perspective will suddenly shift to give you the same view you’d have in any typical platform game. The 3D effects were nice but not essential so seeing it in standard 2D should present the same experience.

The story itself is a mixed bag. The initial joke (overbearing father) wears off pretty quickly and the more engaging story (growth, understanding, acceptance) takes a while to come into focus. When it does the movie improves quite a bit. It has some real moments of connection but they’re not sustained for long. There are some good laughs and some tender touches that had the youngest audience members sighing. This will resonate best with fathers and younger daughters.

All in all The Croods is entertaining, if nothing special.