This weekend we saw both of the “big” movies. First up was The Dark Knight. However, what’s interesting is that Mamma Mia! is selling out here right alongside the huge sellouts for Batman. I’ve never seen the local theater so packed. 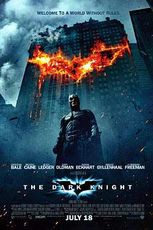 The Dark Knight is the latest Batman movie and second for Christian Bale. Bale now owns the Batman role entirely though I still have serious reservations about the forced voice he uses to play the character. It’s simply distracting. This chapter of the story is aptly named. The movie is dark throughout. It bears very little resemblance to the first Bale effort and that concerned me initially. It’s not that the first one wasn’t dark—quite the contrary. However, the first was more a story involving back story where this one isn’t held back by needing to explain everything that has come before.

I’m pretty sure this will be viewed, for the most part, as superior to the first movie. For me it was a mixed bag. I’m not a typical superhero fan. The first movie told a story that gave the superhero a grounding in reality. This incarnation comes with a lot more action and standard superhero activities.

The big talk of the film is, of course, the job Heath Ledger has done as The Joker. I was a bit concerned by all the pre-movie hype regarding the job he did. It seemed to only materialize once Ledger died and I didn’t want to posthumously hand the guy an award simply for having died. Ledger is being lauded as a master of the art and yet I still can see him in some pretty awful roles. As a result I did my best to go into the movie with balanced expectations. He blew them all away. Every ounce of accolade is deserved. His Joker portrayal is a sight to be seen. It makes you realize just how ridiculous Jack Nicholson‘s performance was in an earlier film. Ledger’s Joker is replete with humanity—sick, twisted, real humanity. It frankly makes the rest of the film work overtime just trying to keep within the same realm of quality.

I had a few downs. I really let out a sigh during a scene that seemed clipped right out of any of the mid-era James Bond movies. This had Morgan Freeman playing the role of Q to Christian Bale’s Bond. It was just distracting. I also couldn’t get into Gary Oldman‘s storyline with the Gordon character.

This is all minor compared to the rest of the movie. It includes some tremendous special effects and today that’s no small feat. It also does a great job of setting the table for another film. The problem, of course, is that no one will be able to portray The Joker now. Not sure what they can do about that.