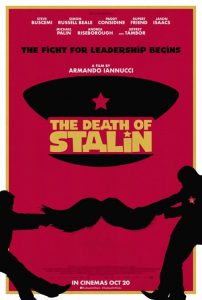 Russian power brokers vie for control of the country when their leader dies unexpectedly in The Death of Stalin.

Soviet Premier Josef Stalin (Adrian McLoughlin) ruled Russia with a literal take-no-prisoners mind-set that few in history could match. The often moody, easily provoked leader ordered the death of countless followers for the smallest perceived infraction or insult. It’s no surprise that anyone looking to thrive in such an environment would adapt an uncanny, often heartless knack for self-preservation. Those living in a rathole quickly realize that the best way to prosper is to think like a rat. Such means of success engender a special breed of rat, thriving more on its ability to survive than on its competence. It’s not exactly a landscape that rewards the best and the brightest.

Stalin’s death would set in motion a state of chaos, endless backstabbing and a cat-and-mouse chess match with players lacking any incentive to follow rules.

Go ahead. I know that you’re thinking it: “Isn’t this a strange topic to choose for a comedy?” It sure is, but it’s nothing new to writer/director Armando Iannucci (In the Loop), who’s best known for creating TV’s satirical political series Veep. In his latest film, Iannucci fills out the details in a story taken from a French graphic novel. His version of the tale feels like a blender pureed with surprisingly accurate history and random footage of the Keystone Cops. The result is a farcical mixed bag that will work for some and land with a dull thud for others. It’s the typical challenge of dark satire.

The cast is overloaded with talent, most notably Steve Buscemi as the always-scheming Nikita Khrushchev and Jason Isaacs as the larger-than-life head of the Russian army Georgy Zhukov. There’s also an unmistakable hint of of Monty Python, which might be due in part to its casting of Michael Palin as Vyacheslav Molotov. While I’m a huge fan of both Python and Palin, this effort is one that I just didn’t find very funny. The jokes are often awkward, surrounded by the surreal and sometimes the downright disturbing. Iannucci also can’t seem to decide if the humor is more about sight gags or punch lines. The plot ends up being driven more by the need to fit in a joke than to tell a cohesive, engaging story. It takes a master like Charlie Chaplin to make people laugh at Adolf Hitler. Stalin is a close second, and Iannucci is no Chaplin. 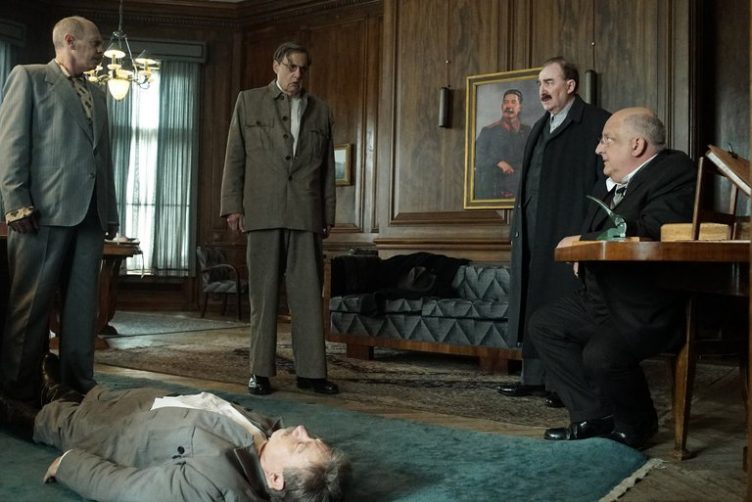