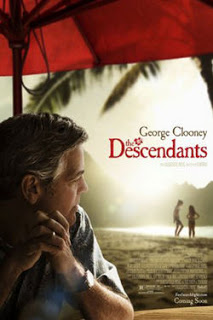 There’s been a lot of Oscar talk surrounding George Clooney and his latest film, The Descendants. Clooney’s always been a solid actor and has tried again and again to break into the top tier of actors only to not quite make it. Frankly, I’ve always felt it’s been the sex symbol curse. Many other actors have fallen prey to this one. Now that he’s looking a bit older and more dignified perhaps he’ll get the credit he’s due.

The film is a very broad effort that’s witty, touching, cute and even appropriately funny (but not uproarious which would be out of place here). It’s the kind of story you love to experience in a movie. It’s almost like a dream in ways. There are many serious moments and then they turn a bit surreal (as in a serious scene where Clooney suddenly starts running causing everyone to wonder if the guy’s ever been told how to run given the awkwardness displayed). It’s the kind of story you want hope goes on and on. It’s neither too long or too short—I just wish it didn’t have to end. That’s the difference.

Clooney is, as billed, perfect for the role in every way. However, he’s far from alone here. His two daughters are also wonderfully effective and noteworthy. Even the wife—who spends the entire film in a coma—looks to have mastered the act of never moving even a single muscle while looking exactly as you’d expect someone in a coma to look. The two daughters should both end up padding their respective resumes quite a bit from their work on this.

There’s also a nice surprise performance from Beau Bridges who’s needed a good platform for some time. The last movie I remember him in is The Fabulous Baker Boys and that was too long ago.

One negative was the continual nagging feeling I got that something was missing and then I realized the part that was missing was the soundtrack. It really doesn’t have much more than some background Hawaiian fare that doesn’t really do much of anything. I couldn’t help but think that the effort would have gone to another stratosphere with a killer soundtrack in the same way The Graduate was elevated by the likes of Simon and Garfunkel.

In the end it feels very much like one of the better films I’ve seen all year and I’ll be surprised if it doesn’t get some play for the gold statue.