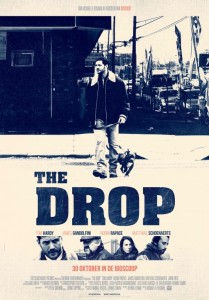 A simpleminded barkeep and his streetwise partner struggle to make ends meet in The Drop.

Bob (Tom Hardy) spends his nights working at a local bar — Cousin Marv’s — in the heart of Brooklyn. It’s a typical neighborhood bar filled each night with sports fans, passersby and the occasional degenerate. Bob’s partner, Marv (James Gandolfini in his final role), still manages the place, but he was forced to sell out to some nefarious Chechens. Unbeknownst to any of the customers, the bar is now a front for gang members to drop off envelopes full of ill-gotten cash to be picked up later.

While walking home one night after closing up, Bob finds a neglected dog in front of a neighbor’s house. When he retrieves the shaking animal, a female voice from the back of the house demands to know what he’s doing out there. Bob explains what he’s found, and the neighbor, Nadia (Noomi Rapace), offers to let him in to clean up the dog’s wounds. Bob takes in the puppy with the understanding that Nadia will stop by to help care for it in his absence.

Everything in Bob’s life is more or less going as planned until two apparently brainless hoods decide to hold up the bar. Marv tries to explain the mistake that they’re making to no avail. When the real owners find out, all they care about is their money, and they don’t care where it comes from. If Bob and Marv can’t make good on it, heads will surely roll. 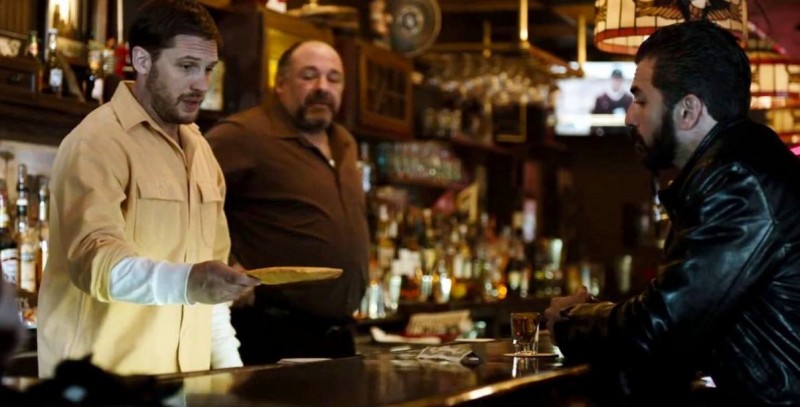 Tense and dark from the outset, this is a film that Gandolfini would have been proud to call his last. He and Hardy are nearly flawless in their roles. Except for a distracting accent, Hardy puts on a real show. It’s the kind of performance that deserves attention come awards season. This unsophisticated, hapless bartender is played by the very same actor who, just a few short months ago, pulled off a similarly impressive feat by playing the whip-smart perfectionist in Locke. As the female lead, Rapace also suffers from a highly distracting accent, but she fills her character’s shoes quite effectively otherwise. Every other character is spot on down to the last detail. Matthias Schoenaerts as a creepy neighborhood bully is yet another standout. It’s all so genuine that you can practically smell the errant alcohol residue from your theater seat.

The biggest surprise of the film is how wickedly funny it is in places. It’s the kind of humor that really helps make a tense movie all the better as it lets you off the high wire just long enough to catch your breath. Aside from the accents, this is a deceptively brilliant film surrounded by wonderfully memorable performances.