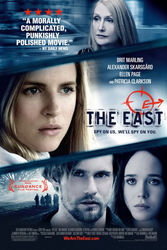 A freshly-recruited agent from a top-flight private intelligence company goes deep undercover to infiltrate an eco-terrorist group in The East.

Relative newcomer Brit Marling, last seen as the daughter in Arbitrage and also the recent The Company You Keep, stars as an undercover agent named Sarah who is assigned by her boss (Patricia Clarkson) to gain the trust of an anarchist cell known as “The East.” Her firm’s only concern is the security of their very high-profile clients. The East specifically targets corporations that they feel knowingly poison or pollute people, animals or the environment for the sake of corporate profits. They espouse a very direct eye-for-an-eye approach. If a company spies on its customers, then they spy on the company. If a company’s actions result in an oil spill destroying a local habitat, they destroy the home of those they deem responsible.

The group all adopt a very bohemian approach to life. The rest of the world wastes food, so they respond by dumpster diving. Squatting in an abandoned house is the preferred lodging while bathing is done in a nearby lake. This also helps to keep them off the radar of traditional law enforcement as they generally keep to themselves when they’re not out hunting for a company target.

The story is mainly a political drama with a slow but steady pace that never slackens enough to be dull and doesn’t really need to jump into a higher gear except for the final act. The look and feel of the film add to the realistic aura that keeps you engaged throughout. Its haunting score likewise adds to the tension.

Where the film runs into trouble is with the story itself. Several issues invade what could have been a real masterpiece. The message is heavy handed and blunt. Corporations are portrayed as always bad, including one example that’s supposed to be a surprise but really isn’t. Similarly, the bad guys are bad but with “good” reason. They’re fighting for a cause and their cause is a good one, so the ends justify the means, right? That’s what the film’s supposed to be going for. It’s a classic Stockholm Syndrome tale but one so pasted on that it loses its impact.  We’re supposed to come along for the ride as Sarah balances one extreme against the other, but we never fully buy into either end.

There are a number of sequences that just don’t work at all and really stretch the boundaries of any sense of logic.

When the film is good, it’s excellent. The acting is superb given the material as is. However, some character development would have really helped.  It’s still a fairly entertaining — if flawed — effort.