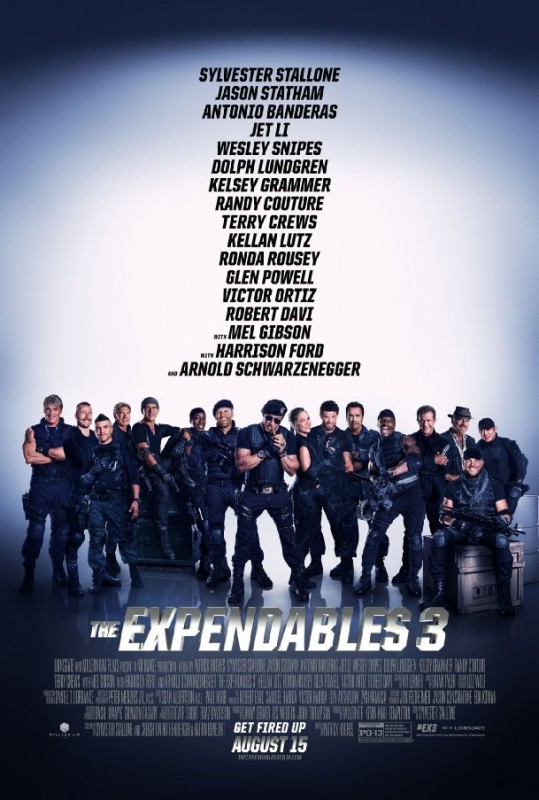 As I get older, I find that it’s more difficult to get up the energy to even mow the lawn, let alone go off into battle or fight someone younger. I have immense respect for anyone who somehow pulls off these stunts in their golden years. Sylvester Stallone and crew face those kinds of challenges and recruit some new blood in The Expendables 3, the latest in the series of action films that pokes fun at its characters even as they complete incredible action sequences. (I don’t know why Stallone doesn’t make a deal for an obvious tie-in with Depend undergarments. “Rely on The Depend-ables — They stand up to any challenge, and you’ll never know they’re there.”) At a time when a series might get stale, The Expendables 3 turns it up a notch and consistently delivers its welcome mix of self-deprecating humor, fights and action sequences.

If you look at the movie posters for The Expendables 3, it might seem ridiculous how many big-name actors appear on the list or in the group photo. This presentation has been the hallmark of the series, and this third group of names is more than twice as many as for the first film. I was concerned going into the theater that it would be hard to keep people straight with a lot of shuffling in and out of these famous faces, but nothing could be further from the truth. Director Patrick Hughes (writer/director of Red Hill) and cowriters Stallone and writing team Creighton Rothenberger & Katrin Benedikt (writers of Olympus Has Fallen) manage quite nicely to define the roles of the extensive cast and add in new people at just the right time. I know that there’s a fourth movie already in the works, so it will be interesting to see how many people will end up in that cast. So far, the actors in the series have been additive with only a few deaths along the way. If that continues, they will probably need to use a smaller font on the next poster.

Do you expect a deep plot with this entry in the series? You’re not going to get one here, but the simple plot has its share of surprises and certainly drives the action sequences. Barney Ross (Stallone), the leader of the titular group, stages the breakout of a prisoner in the opening sequence along with closest team members Lee Christmas (Jason Statham), Gunner (Dolph Lundgren), Toll Road (Randy Couture) and Caesar (Terry Crews). Things soon escalate into a real mission for the team, and as the mission goes south due to unforeseen circumstances, Barney has to reevaluate things. He decides to add new, younger members (Glen Powell, Ronda Rousey, Victor Ortiz and Kellan Lutz) to the team, and that’s the first step in a maturing of the mercenaries so that they can deal with anything. You can guess what comes next — lots of explosions, combat and wisecracks.

I was impressed with the variety of actors in new roles for the series. Rousey is hands down my favorite of the batch as a beautiful, strong woman, and she’s the first female member of The Expendables. Harrison Ford plays a CIA contact for Barney, and both Ford and his character replace Bruce Willis and his character Church after Willis’s salary demands weren’t met. Arnold Schwarzenegger is back as the cigar-chomping Trench, and there’s just enough of his presence to make me happy. Wesley Snipes and Antonio Banderas are big additions to the team. Banderas is funnier than I can remember him in any other movie, while Snipes mixes parkour moves and ruthlessness for a deadly combination. Mel Gibson doesn’t often play bad guys, so it was a surprise how impressively he portrays a villain. The only thing that he could have done to be even more sinister was wear a Nazi uniform. 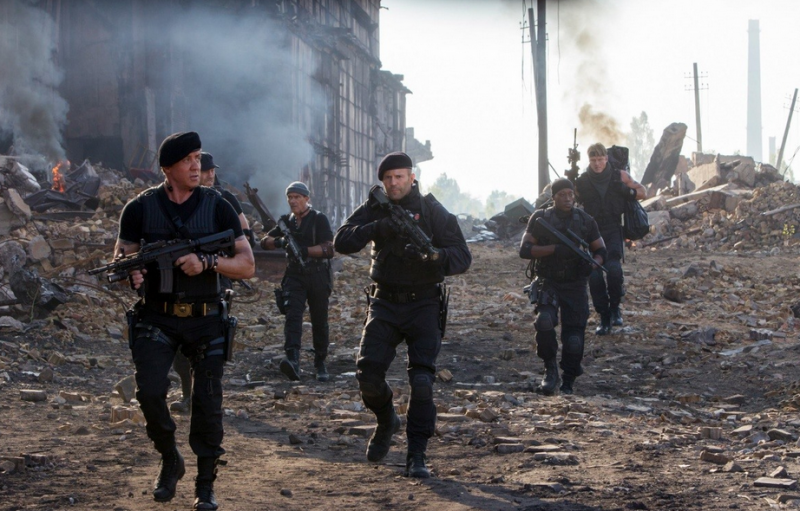 The action sequences are really the focus of the series as well as the banter between characters. The Expendables 3 contains enough land, sea and air combat to tide you over until the next movie. The helicopters alone provide some amazing scenes, so the tanks that come later just ratchet up the excitement. The body count is extremely high — somewhere between 200 and 300, I would imagine — so you can’t help but laugh as bad guys are mowed down left and right. That same kind of reaction is just natural for the over-the-top action and stunts. Is any of this stuff really possible in our physical world? Probably not, but it’s a lot of fun to watch up on the screen. The filmmakers found some particularly ravaged sites for the bigger scenes, and action looks so much better on location than in a studio. This is one of those movies where you can’t think about what’s going on. Just strap in and enjoy the ride.

I can’t complain at all about The Expendables 3. It delivers exactly what you expect from Stallone and his veterans from the past two films. It would take a lot to elevate an entry in this series a notch or two, but each film is somewhat better than the preceding one. Many of the characters joke about things like aging bodies and sex drive, which makes some scenes feel like commercials for Viagra. The camaraderie on display between action sequences may turn off some moviegoers. Instead, I liken it to the acoustic segments of concerts — they’re enjoyable in a different way and give you a slight break before a barrage of hits. I have no doubt that most of the cast members will be back for another round. I hope that I laugh out loud and enjoy any future missions as much as I did The Expendables 3, which is proof positive that even aging action stars can still have a lot of kick left in them.