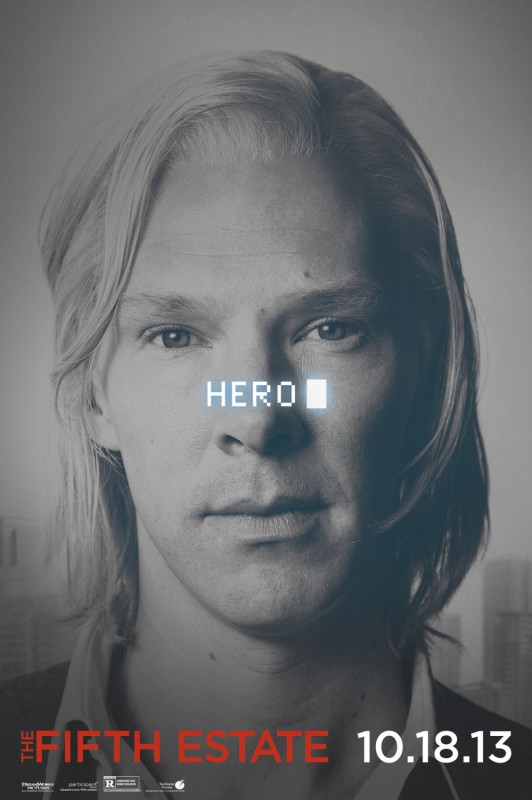 In recent months, Benedict Cumberbatch has taken on two iconic characters. In one movie, he plays an arrogant, creepy, powerful man with superhuman abilities, a deliberate way of speaking and an unusual look who wants to expose the lies of leaders in order to benefit his people and ultimately ends up confined to minimal living quarters because of his actions. In the other film, he’s Khan. Indeed, that’s the problem at the heart of The Fifth Estate, a fictional drama about the start of WikiLeaks and its rise to prominence with the release of classified U.S. military documents. Julian Assange (Cumberbatch) is painted in broad strokes as a villain of sorts in a story that’s less about WikiLeaks and more about the relationship between two hackers and their plan to change the world with their small organization. The film is ultimately weighed down by too many problems and doesn’t succeed as any of the various types of movies it tries to be.

The people behind The Fifth Estate would normally offer much promise for a new project. Director Bill Condon was writer/director for Gods and Monsters, Kinsey and Dreamgirls and also managed to direct both installments of The Twilight Saga: Breaking Dawn. Writer Josh Singer also contributed to Fringe, The West Wing and Lie to Me. Maybe the problem is that they based this film on two books from people who parted ways from WikiLeaks with perhaps an axe to grind. The Fifth Estate cites Daniel Domscheit-Berg’s Inside WikiLeaks: My Time with Julian Assange at the World’s Most Dangerous Website and David Leigh and Luke Harding’s WikiLeaks: Inside Julian Assange’s War on Secrecy, a book released under the branding of The Guardian. As with any story, there are multiple perspectives, and the one focused on in this film is clearly that of Daniel Berg (Daniel Brühl) and his relationship with Assange over the course of about three years. As with Brühl’s recent film Rush, he plays a supporting character who is really the focus of the movie. Brühl is not at fault for this project. In fact, the cast is good apart from Cumberbatch. By focusing on Berg, the story overlooks or bypasses a lot of details that must have happened and instead feels like revisionist history.

The Fifth Estate opens in July 2010 with the release by WikiLeaks of Afghan war logs along with partners The New York Times, The Guardian and Der Spiegel before it jumps back in time to 2007 and the fortuitous meeting of Berg and Assange on New Year’s Eve 2007 in Berlin at the Chaos Communication Conference. Assange is brash and standoffish, while Berg is friendly and overeager. There are early scenes with the exposition of fraud by WikiLeaks at Swiss bank Julius Baer and a quick summary of other successes with Assange telling Berg that “courage is contagious.” Along the way, Berg develops a relationship with Anke Domscheit (Alicia Vikander), the real man’s eventual wife. Assange and Berg bring on hacker Marcus (Moritz Bleibtreu) and Icelandic parliamentarian Birgitta Jónsdóttir (Carice van Houten) and develop working alliances with Alan Rusbridger (Peter Capaldi) and Nick Davies (David Thewlis) of The Guardian. This ultimately all leads up to a plot about the time period in which WikiLeaks released a video of Apache gunships firing on Iraqi citizens that they dubbed “Collateral Murder” and the publication of thousands of classified documents slipped to WikiLeaks by Bradley Manning.

The Fifth Estate tries hard to be The Social Network, but it fails to re-create the drama of that movie or perhaps the real excitement or intrigue of the experiences of WikiLeaks and its volunteers. Assange is presented as a wunderkind with computers, systems and technology as if a combination of someone like Tony Stark (Robert Downey Jr.) of the Iron Man movies and the character played by Matthew Broderick in WarGames. In fact, an early scene feels like it’s lifted right out of Iron Man 3. Assange and Berg meet on New Year’s Eve and go to the top of a building on a snowy night to look out on the city much like Aldrich Killian (Guy Pearce) does in Iron Man 3 with Stark leaving him in the lurch instead. The final third of the movie takes a stab at the spy thriller genre a la The Bourne Identity. Laura Linney and Stanley Tucci are State Department staffers responding to the release of the Afghan war logs and subsequent diplomatic cables, and there are some tense scenes in which a source named Dr. Tarek Haliseh (Alexander Siddig) needs to escape from the Middle East because he is mentioned in the cables. This subplot seems added on in order to bring in those thriller elements and does nothing to make the movie better.

A lot of the film evokes technology and computer networks. Assange and Berg lug around their laptops in ever-present backpacks. Condon tries to depict the world of hackers and Assange’s tools with a room filled with desks as far as the eye can see to represent online identities and the submission platform for documents to WikiLeaks. I get it, but people aren’t so out of touch these days that he couldn’t have used some other technique to represent the vast number of connections on the Internet and Assange’s secrets for moving and protecting data. This other environment might evoke The Matrix, but it’s just another poor filmmaking choice. I’m a software engineer, and nothing irks me more in movies than the awful depictions of people using computers. In The Fifth Estate, you can see all of the following mistakes: people speak what they’re typing — I’m not doing that right now, hackers type code and messages faster than humanly possible and the interfaces are shown to be highly complicated with multiple colors and windows rather than practical displays. 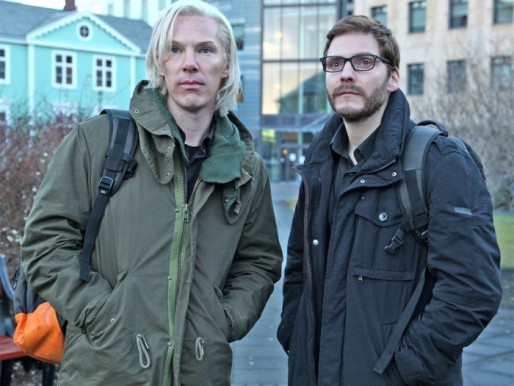 I have seen much praise for Cumberbatch’s performance, but I just don’t get it. I think it’s a pretty stereotypical portrayal of Assange. If you look at even a few clips of Assange, you notice an authoritative man full of swagger and perhaps a little fluid in his movements and speech. Cumberbatch doesn’t get any of that right. He merely plops on the blonde wig and tries to talk techie in what is at its core an antagonist to Berg’s protagonist. He only gets one scene right. There’s a famous video of Assange dancing weirdly, manically in an Icelandic club, and Condon reproduces that here with Cumberbatch flailing his arms. It’s pretty telling if the only scene that smacks of reality is a throwaway one. I give Cumberbatch points for trying, but he should have probably granted the real Assange’s E-mail requests to not take this role.

I recently also reviewed We Steal Secrets: The Story of WikiLeaks, so it’s only fair to make a comparison. That documentary focused more on Assange and Manning in relation to the leaked military documents and didn’t so much cover the WikiLeaks organization itself. The Fifth Estate goes in the other direction by showing the early days of WikiLeaks, so it has more of WikiLeaks than the documentary before ultimately taking the easy route out and concentrating on the Manning leaks. I received a response from WikiLeaks to a tweet of my review that simply said “You’ve been had” along with a link to an annotated script of the documentary with comments and corrections. Similarly, WikiLeaks released talking points for The Fifth Estate that call into question many of the scenes and purported facts in the movie. I’m sure that Assange is laughing about the failure of The Fifth Estate at the box office. I read these talking points and don’t think the factual inaccuracies made a bit of difference in my feelings about the moviegoing experience. I’d really like to see an authorized version of events rather than all of these third-party accounts, but I don’t know if that will ever happen. (I have progressed through all sorts of computers and devices during the technology revolution as a programmer and GUI designer in kinship with Assange and the hacker community, so let me extend my invitation to Assange to conduct an unedited, unredacted interview about his computer/hacking experience, life and WikiLeaks.)

In case you’re wondering, the title of the film comes from the fact that the media or press is referred to as “the fourth estate.” The idea is that “the fifth estate” is all of us because we have the ability to disseminate information outside of traditional publication methods. Heck, I’m kind of doing that with this review, but I want to have no connection with this fictitious “estate.” Carter Burwell normally produces compelling scores, but this music is muted and amusingly, stereotypically techie with lots of fast notes and synthesizer sounds. I guess Condon convinced him of his vision. The Fifth Estate is a watchable but bad film that does nothing to tell us about the real WikiLeaks or its founder and instead tries to take on too many personas rather than stick to a single avatar.