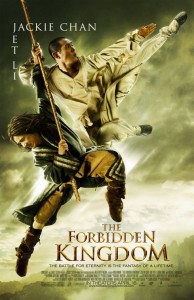 This past weekend we ventured out to see, “The Forbidden Kingdom”. It’s a new martial arts movie starting Jackie Chan and Jet Li.

The story is about a teenager who’s heavily into martial arts movies and lore (but not actually into the actual physical side of it) and befriends an elderly pawn shop owner in Chinatown.

He runs into some bully classmates who want him to get them into the store owner’s shop so that they can rob it. During the event the kids attempt to steal a storied staff that the teen sees as a priceless heirloom and attempts to run away with it. ‘

The bullies catch up to him and during the entanglement he manages to fall, with staff, off the side of a tall building. During his decent he’s transported to ancient China where he runs into all sorts of mythical characters and plot lines.

The story seems very much a martial arts retelling of “The Wizard of Oz”. The open sequence above is right out of the black-and-white opening footage of Oz while the trip to China is Oz and then of course comes the resolution. Along the way the teen encounters several odd characters and villians who also seem to come straight out of Oz. There’s even a long road leading the way. In fact, about the only element fully missing is a replacement for Toto.

In the end it’s all a bit disjointed. Some parts are interesting, others are boring and some just don’t work. It wants to be “Crouching Tiger, Hidden Dragon” but doesn’t make it. The martial arts sequences are fun but there’s really nothing that feels new. In fact, I’m pretty tired of the entirely unbelievable physics-be-damned stunts that seem to come out of any similar film these days.

The acting is just okay. Jackie Chan has continued trouble with English and it gets in the way here. Plus his “drunken master” routine grows old quickly. Jet Li fares a bit better but really doesn’t help a lot either. The teen, played by Michael Angarano, just doesn’t work at all for me. He just doesn’t fit in this part, at least for me. He was more distracting to me than anything.

I just couldn’t get into this movie. It’s not terrible but it’s not something anyone needs to rush out to see either.