Israel’s interior security service—the Shin Bet—is the target of a surprising documentary in The Gatekeepers. The most fascinating element of the movie is that it’s very much a self-examination as the only people interviewed are the very individuals who led the organization for the last 30 years—and this is the first time they’ve ever spoken on record. 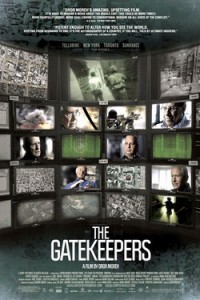 The documentary brings into focus an organization, a country and its never-ending challenge to find its way in the world. The absolute bluntness that the directors bring to their subject is astounding. These are men willing to accept responsibility for their actions—good and bad it seems.

There are also moments where you wonder about the tenor of the film and even the intellect of those being interviewed. For example, one director mentions that, after much interaction with Palestinian leaders, he finally realized that these terrorists (in his view) saw him equally as a terrorist, and thus he understood that one man’s terrorist is another man’s freedom fighter. Most of us understand that and it’s shocking to think that someone with so much responsibility didn’t know this all along.

You also wonder if this is all a political stance against the current leaders in Israel. I also have to admit that, as a marketing person, I had to consider that this might simply be a PR effort by Israel or the Shin Bet itself to evoke a specific positive response. Nothing is off the table.

It is, regardless, refreshing to find a film so calm in its analysis. I fully expected a film laden with shock value designed to sell me on the Israeli plight and, instead, found a story almost too lacking in emotion. Even its look was decidedly plain. That helps bring an understanding instead of simply getting lost in the emotion.

The final moments of the film left me speechless and forever impacted by the experience. I also believe anyone who is Jewish, most especially any Jews who are interested in their more recent history, will get far more out of the film. Most elements translate to the goyim among us but some other elements wouldn’t be hurt by knowing that history.