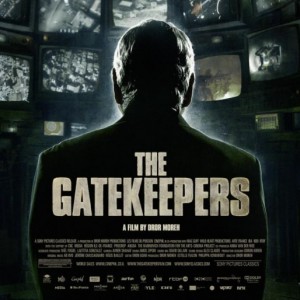 Imagine a film in which all of the living presidents of this country — or any country for that matter — talked about their successes, failures and strategies for their administrations. It would be a gift to politics fans and history buffs alike because of the perspectives and stories concentrated into a couple of hours. It’s one thing to read an ex-president’s memoirs; it’s another thing entirely to look into their eyes and examine their body language when they talk about difficult subjects with an interviewer. That’s the idea behind The Gatekeepers, a nominee for Best Documentary Feature at the recent Oscars. The leaders of Israel’s secret service, known as Shin Bet or Shabak, provide eye-opening interviews about their struggles against Israel’s enemies both foreign and domestic. While at times riveting, the film doesn’t live up to its imagined potential and instead occasionally bores with its stilted format.

The Gatekeepers is the work of writer/director Dror Moreh (writer/director of Sharon), a talented filmmaker who perhaps is a little green for this wonderful concept for a documentary. He interviews six former heads of Shin Bet about their experiences and lingers with the camera on their faces to capture the pain that is evident in almost all of their features despite the occasional defiance. Unfortunately, this is largely a “talking heads” documentary with little or no diversion through file footage or graphics from the positions of the six men on screen during their interviews. Although such discussions with interview subjects are necessary, it’s not too hard to imagine ways to get these men up from their seats and more active during their sessions. The reporters at 60 Minutes often stroll with people in familiar or pertinent places as they talk to them as well as conduct the traditional sit-down interviews. Moreh could have put together a timeline of events during their terms or look at an interactive map of significant terrorist attacks. Anything would have been better than the format he uses.

The titular name for the men in this film belies the complexity of their job. In addition to all sorts of terrorists and enemy combatants like Palestinians and members of Hamas, the Shin Bet leaders had to also confront radical Fundamentalist Jews who refused to give up any land whatsoever to Arabs. The Gatekeepers doesn’t use any structure or order for the comments from the six men. They are mixed and matched as appropriate to the subtitled topics of the film. In order, however, the men are Avraham Shalom (1980 – 1986), Yaakov Peri (1988 – 1994), Carmi Gillon (1994 – 1996), Ami Ayalov (1996 – 2000), Avi Dichter (2000 – 2005) and Yuval Diskin (2005 – 2011). All of these men had troubles during their terms, whether it be uprisings in the West Bank or problematic Jihadists, but Shalom and Gillon were particularly embattled. Shalom ordered the execution of bus hijackers in 1984, which eventually led to his removal after public outcry. Similarly, Gillon’s days were numbered after Prime Minister Yitzhak Rabin was assassinated by a Jewish extremist on his watch in 1995. The men vary in personalities, but they all come off as avuncular and tough. Curse my pop culture upbringing if you will, but Peri bears a striking resemblance to actor Gavin MacLeod.

The most interesting aspect of The Gatekeepers is the demeanor of the men in the film. They are honest and direct about their careers, and they all bemoan their failures as well. To a man, they see problems with the everyday tactics of confronting terrorism instead of forming a master strategy to bring peace to the region. They used sometimes brutal techniques to eradicate their enemies, but time seems to have turned them into bigger peacemakers who see value in negotiation to create a better future for Israel. The men speak rather generically about their terms in office and the Middle East rather than a more guided discussion on their years in power. More direction from Moreh would have gone a long way to eliminate some of the tedium of watching this film.

For all of my complaints about The Gatekeepers, I still found it to be an important and unique documentary. I had hoped during the film that Moreh would bring together these men into a room for a group discussion that would serve as a payoff to the preceding commentary. Alas, that doesn’t happen — probably because of logistics. There may be more entertaining or informative documentaries available on disc and in theaters. Still, The Gatekeepers is worth a look for its ambitious achievement as well as a peek at the men behind the scenes of challenging times in Israel.