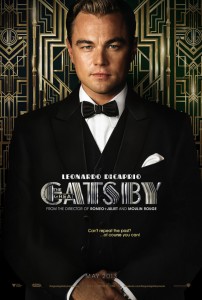 Classic books don’t always translate well to classic movies. These adaptations seem to use the parts of the books that suit the filmmaker’s vision and throw away other elements that don’t, whether they’re important in the books or not. The Great Gatsby by F. Scott Fitzgerald is often regarded as “The Great American Novel.” Over the years, it has been turned into a movie a few times with varying degrees of success. I haven’t always been a fan of the films of Baz Luhrmann. For whatever reason this time, he properly mixed his special blend of contemporary music, manic direction, lavish production design and solid acting for a cocktail that I willingly swigged over a running time that appeared daunting but flew by like a yellow jalopy.

It feels like I saw the original trailer for The Great Gatsby about a year ago. I remember that its original release date was around Christmas. In a way, I’m glad that it didn’t come out then because it might have gotten lost somewhere between Les Miserables and Django Unchained. It at least gets one weekend in the spotlight right now. It certainly deserves it. I was thoroughly entertained from start to finish in all ways from the visuals and production design to the acting, story presentation and eclectic soundtrack. Cowriter/director Luhrmann and cowriter Craig Pearce — who worked with Luhrmann in the same capacity on Strictly Ballroom, Romeo + Juliet and Moulin Rouge! — deliver an experience that surprised me, moved me and ultimately convinced me that it deserves to maintain its place as the definitive version of the novel for many years to come. Trailers are supposed to convey the spirit of a film and convince you that you want to see it. The current trailer really fits the film properly and boasts that inspired version of “Happy Together” by Filter that reimagines the original version by The Turtles as if it passed through the hands of Trent Reznor.

I must admit that I had forgotten the ins and outs of the novel over the years. It was required reading in my prep school English class, but so were Dracula, Lord of the Flies and A Night to Remember. I prepped a bit with online resources, so I can say with some authority that the film captures the era and decadence of the novel as well as the symbolism of elements like colors. (For example, that green light at the dock in the movie is a symbol of hope, life or a fertile future whereas the use of yellow throughout reminds you that yellow is a cheaper version of gold just as the showy version of wealth by many people doesn’t compare to real wealth.) Luhrmann effectively marries the literary aspects of the novel with the fresh take on the story that is retro and still speaks to today’s audiences.

Despite the lead billing, Leonardo DiCaprio does not play the lead character. Jay Gatsby is the titular character, but Nick Carraway (Tobey Maguire) acts as the narrator and stand-in for all of us. Carraway is a Midwesterner who moves to a small cottage on Long Island near his cousins Tom Buchanan (Joel Edgerton) and Daisy Buchanan (Carey Mulligan). Nick has a Wall Street job and knows his way around bonds. It’s 1922, and the nouveau riche live in reckless abandon with no idea of the crash to come. Nick gets glimpses of mysterious neighbor Gatsby in the windows of his enormous mansion, so when Gatsby personally invites him to one of his elaborate parties, Nick gets drawn into his world. Gatsby and Daisy used to have a thing until Gatsby went off to war and returned to find that Daisy had married Tom. Gatsby’s wealth enabled him to buy his estate right across a lake from the Buchanans. He hopes to win back Daisy and uses Nick to get to her. Tom has his own fling on the side with Myrtle Wilson (an underused Isla Fisher), the wife of mechanic George Wilson (Jason Clarke) in the slums between Long Island and Manhattan.

The Great Gatsby has a little something for everyone. There are at least two party scenes that are filmmaking works of art as far as production design, costumes, music and editing. One lavish party takes place in Gatsby’s mansion and has all of the energy, excitement and confetti of Times Square on New Year’s Eve crammed into a foyer and landing. I only hope that I can attend a party like that at least once in my life. Another is more intimate but somehow wilder as Tom drags Nick along to see Myrtle in their little love nest that’s almost overly decorated with red fabric and objects. Nick allows himself to get drunk, and the pacing and editing match his state of mind. I actually have been to a few parties like that, so Luhrmann presented that realistically. The film has drama, romance and action to balance the parties. When Gatsby turns around to greet Nick for the first time, you couldn’t have framed a more perfect entrance for DiCaprio. A scene with Gatsby and Daisy kissing against a tree oozes with all of the feelings of summer romance. Gatsby’s yellow roadster — note the color — takes us on a few high-speed rides in a movie that doesn’t require such racing.

The strong acting from the main cast members sells the dated story. DiCaprio and Luhrmann worked together on Romeo + Juliet, so Luhrmann knows how to frame him properly and make him look like a star. Maguire is fine, but this really isn’t a stretch for him. Mulligan delivers on the promise she showed in An Education and just pierces your soul with every gaze. Fisher and Clarke are good in their small roles. The real surprise here is Edgerton, who gets many chances to chew up the scenery and go toe to toe with DiCaprio. Legendary Indian actor Amitabh Bachchan portrays Gatsby buddy Meyer Wolfsheim, a man whose secrets turn the story upside down. Bachchan looks a little strange with the unusual combination of his beard and outfit, so that took him out of character for me. I was also impressed with Elizabeth Debicki as a potential girlfriend for Nick named Jordan Baker. Debicki has a pixieish quality that’s perfect for the role, and for that reason, she reminded me of Rooney Mara.

I was really worried that I wouldn’t like the music when I heard that Jay-Z culled the songs for the soundtrack. He and Kanye West penned some decent original songs for the film. They’re featured in scenes that fit them like the main party and a visit to a speakeasy rather than forced into scenes just for the sake of the juxtaposition as Luhrmann has done ineffectively in the past. The Bryan Ferry Orchestra interpreted some numbers in 1920s arrangements, including the Roxy Music classic “Love is the Drug.” The most effective song for me is Lana Del Rey’s “Young and Beautiful,” which absolutely haunted me after the movie and I can hear in my head right now. It’s melancholy and romantic at the same time, and I defy you to not think of your first love when you hear it. True to the spirit of the film, it’s also reprised as a flapper version later in the film.

Race plays a part, however subtly, in The Great Gatsby. On Long Island, blacks are mostly seen as servants. In the slums, they’re working folks right along the white people. One man notably plays the saxophone on a fire escape while Tom, Nick, Myrtle and others party. When the main characters drive to Manhattan, they pass a group of black people in a car drinking champagne and listening to — in this scene — anachronistic rap music. Once in the city, blacks and whites sit side by side in the speakeasy. I’m not certain that such racial harmony existed in 1920s New York City, but if Luhrmann used this progression of professions as symbolic of the advancement of blacks in this movie’s world, then I buy it. If you really want a jarring but captivating version of The Great Gatsby, check out the 2002 movie G by cowriter/director Christopher Scott Cherot. Gatsby is reimagined as a rich rapper who wants to steal his rival’s girlfriend.

I can’t finish this review without pointing out two major flaws with the film that keep it from being a five-star review. First, let’s dispel this notion that 3D has any usefulness for this movie. This was a 3D conversion that adds nothing to the experience. The most obvious 3D effects are in the credits, and that’s not worth dulling the beautiful colors in the scenes. Please avoid the 3D version to show these idiots in Hollywood that 3D is a gimmick whose shelf life has passed. Even worse is the repeated use of “old sport” in Gatsby’s dialogue. The words were tacked on to the end of too many sentences to the point of annoyance. I don’t know if Luhrmann or Pearce is responsible for these lines; it’s a major distraction that takes you out of the movie and actually rises to the level where you could make a drinking game out of the rampant utterances.

I had written off Luhrmann as an ambitious hack after my bad experiences watching Romeo + Juliet and Moulin Rouge! years ago. He more than redeems himself here with a beautiful, enthralling movie that looks like it’s right out of old Hollywood and even pays homage to it, too, with a sequence that recalls Sunset Boulevard. The Great Gatsby unites a classic story with modern elements and storytelling techniques for over two hours of pure movie magic.