Tobey Maguire as young Nick Carroway leaves behind his midwest home for a shot at fame and fortune in 1920s New York City where he meets the most intriguing person of his life in The Great Gatsby. 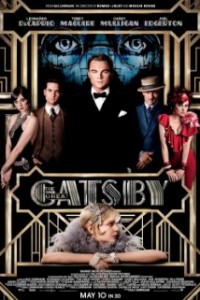 This is a film I’ve been looking forward to since the first previews appeared. This latest interpretation of the book comes to us from Baz Luhrmann, who’s previously directed four films, including Strictly Ballroom and Moulin Rouge!, which I heartily enjoyed. All of his films are dreamy, bold and risky projects that are usually polarizing for most viewers. The Great Gatsby seems a perfect playground for such a creative imagination.

I should point out that I’ve never read the original story by F. Scott Fitzgerald, so I went into the film having no idea about the plot. The key question was if the film would deliver a full foundation for others new to the material.

Luhrmann started right off with a look and feel that fully tantalize the senses. Everything, including the opening (and closing) titles, is curious, audacious and endlessly enveloping. Every location is simply resplendent. It seems quite obvious that one major hurdle facing Luhrmann was the necessity of selling today’s audiences on the sheer grandiose excess of Jay Gatsby.  The 1920s were a heady time. Conveying that to viewers used to cell phones,  laser light shows and large-screen HDTVs is no small order, yet Luhrmann delivers. When Gatsby finally introduces himself, the energy is palpable. The famous parties jump off the screen with mind-blowing decadence the likes of which none of us will ever experience while, at the same time, feeling entirely realistic.

The special effects are of the highest caliber throughout with the sound providing nuanced depth unlike anything I’ve ever experienced in a theater before. It’s not easy to spot Oscar-worthy sound effects, but this one seems a lock.

The acting is solid from all involved. Maguire plays Carroway as the perfect everyman. We can identify with him with ease. Leonardo DiCaprio is a near-flawless Gatsby. Every shot he’s in drips with intoxicating fascination. Carey Mulligan as Daisy Buchanan brings the right mix of enigmatic deference and innocence to her essential role. Daisy’s despicable husband Tom, played by Joel Edgerton, is handled perfectly, dominating much of the second half of the film.

There are some missteps along the way. The film feels epic but never reaches into your soul. There’s virtually no emotion to it. I never bought into several of the key relationships — most notably the one between Gatsby and Daisy. There’s also a major question about Carroway that involves his current state both in his introduction and final scene that seems entirely unanswered and obvious, but that’s better left unsaid in a review.

DiCaprio is, as noted, a great Gatsby, but his use of the catch phrase “old sport” felt entirely unnatural and distracting.

There’s also the matter of a green light which, I suspect, must be better explained in the book. In the film, I wasn’t entirely clear about its significance. Then again, much of this tale involves deep symbolism. Although this symbol seemed essential, it should have been expressed more directly.

The soundtrack is a complete mixed bag. The period was dominated by jazz, but here we get a hybrid that tries to mix in rap and electronica that just doesn’t work. There are also scenes that feel contrived to draw in a black audience, given Jay-Z‘s involvement in the music. You’d have thought the 1920s solved racism entirely given its treatment here. Wealthy blacks and whites live and party harmoniously together in a way I suspect Fitzgerald never intended.

What we’re left with is a great fairy tale told with spectacular flourishes that tickles the imagination and plays with our sense of right and wrong. The journey is both effortless and enjoyable if not entirely satisfying.