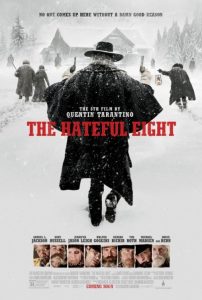 A bounty hunter and his prisoner are forced to take shelter from a blizzard with several mysterious men in The Hateful Eight.

Across the snow-covered plains of Wyoming, a lone stagecoach makes its way. Its dedicated driver, O.B. Jackson (James Parks), transports his two passengers towards their eventual destination — the town of Red Rock. Inside the carriage rides an obsessively vigilant bounty hunter, John Ruth (Kurt Russell), with his dour detainee Daisy Domergue (Jennifer Jason Leigh). Ruth’s determined to deliver the outlaw to stand trial for a crime that will surely see the woman hang from the neck until dead. Of course, he will also be paid handsomely once the fugitive is delivered.

Ruth knows from experience to be on the lookout for anyone who might want to stake their own claim to the bountiful bounty. What he hadn’t planned on was an ominous blizzard. It means taking refuge in the only viable shelter along their path — a curiously named establishment known as Minnie’s Haberdashery. Once settled in, Ruth studies the occupants with whom he’ll be forced to wait out the storm.

The group includes just two men whom he knows aside from the stagecoach driver. Major Marquis Warren (Samuel L. Jackson) is a noteworthy northerner — a decorated officer of the Union army and quite a rarity given his African roots. Chris Mannix (Walton Goggins) is the son of a well-known rebel soldier and, if he’s to be believed, on his way to Red Rock to become its next sheriff. The other four men are all unknown to him. They include Oswaldo Mobray (Tim Roth), an Englishman also bound for Red Rock; General Sandy Smithers (Bruce Dern), an aged Confederate; Joe Gage (Michael Madsen), a simple cow hand; and a Mexican named Bob (Demián Bichir), who’s filling in for Minnie while she’s away visiting family. The tension builds as fast and furiously as the outside snowfall. Is everyone here just to escape the elements, or does someone have a secret agenda?

Writer/director Quentin Tarantino attempts to make his mark with a bold Western delivered in the style of the best of the genre. His well-practiced aim misses the heart but still hits the target. The film breaks for an intermission at the 100-minute mark, but the similarity between the two halves is as disparate as George Armstrong Custer‘s bold ride into the Little Bighorn and his slaughter once there. The meandering introduction gives way to magnificent mayhem in the second half.

The performances are as palpable as the cold that permeates the creaky cabin. Jackson has never been this good, and that’s no small bar to clear. There are two oddities worth mentioning. Roth’s role seems entirely conceived as a vehicle for perennial Tarantino stalwart Christoph Waltz. Russell takes the hardest hit; his Ruth is a one-dimensional character who grows annoying after the first 20 minutes. There’s also an unmistakable elephant in the room — most of the plot seems lifted almost entirely from Russell’s most famous turn in 1982’s The Thing. Did Tarantino hire him because of the similarities, or is his inclusion driving the comparison? I have no idea, and I’m not sure that it matters.

What’s most surprising for a film of this magnitude is the lack of attention to detail. For example, the language is often entirely wrong for the period. Even the simplest of elements seems glossed over. Shot after shot shows us a stagecoach traversing mysteriously plowed paths across what should be a wild prairie. One detail that isn’t overlooked is the ever-deepening mystery. It’s as elusive to pin down as a windblown flame.

The real fun begins post-intermission. The menu is rife with the red meat that Tarantino’s fans have come to expect — on the plate and everywhere else it can reach. I just don’t get the stark contrast shift. When Tarantino finished his last film, Django Unchained, he said that it introduced him to the Western genre and that experience showed him how to make a great one. I just think that he should have watched Unforgiven a few more times. 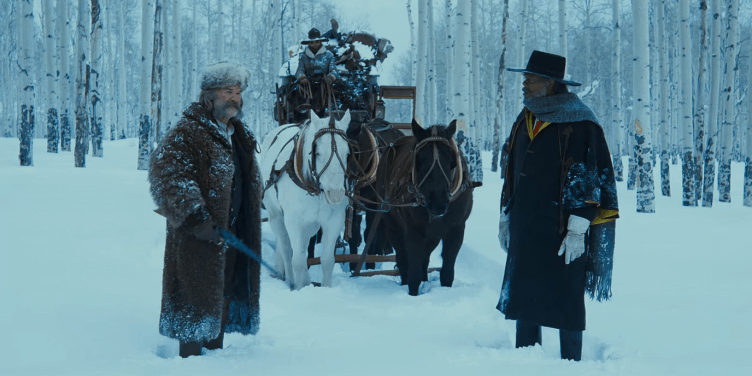