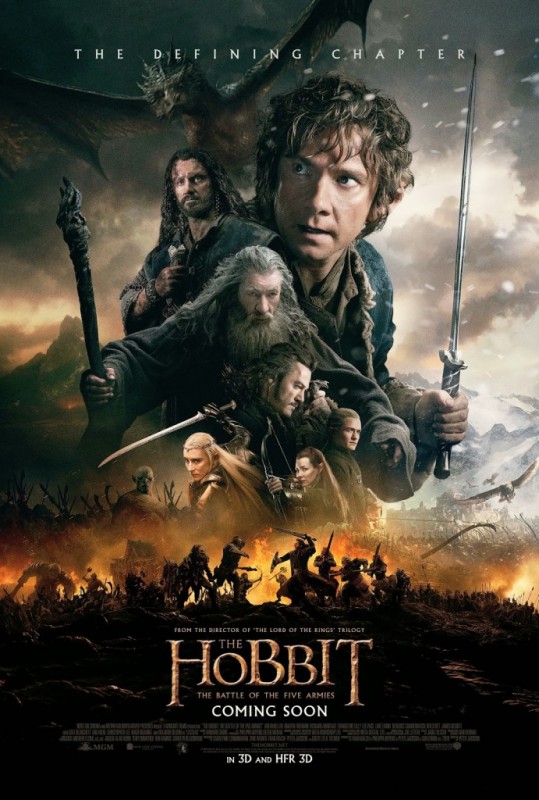 Most film trilogies build up to a finale that pulls together all of the characters and subplots into a satisfying story that resolves most things for those who invested in the series. That is certainly the case for The Lord of the Rings. Each film got better until the moving, dramatic third entry that was worth the wait. I don’t feel the same about the adaptation of The Hobbit. The Hobbit: An Unexpected Journey blew me away with both its presentation and how close it was to the source material. The Hobbit: The Desolation of Smaug felt like a filler movie because it largely was one as it invented characters and sequences to tie together the first film with the events that complete the story of hobbit Bilbo Baggins. The Hobbit: The Battle of the Five Armies limps to a conclusion that probably plays better right after watching the second film than it does on its own a year later. It gets a bump from one brilliant scene that reminded me of the magic of Peter Jackson at his best and a story that goes back to following the book as closely as the first film did.

For those with their heads in the sand for the past two years, director Jackson and cowriters Jackson, Fran Walsh, Philippa Boyens and Guillermo del Toro adapted J.R.R. Tolkien’s The Hobbit into three movies. Some would argue that the series should have stayed with the originally planned two movies, and I would mostly share that sentiment except for the addition of Evangeline Lilly as the elf Tauriel. The split into three movies shows its weakness here because the focus is on a battle that occupies just a few pages in the book but results in a 45-minute sequence. Moreover, most of the characters have minor roles despite appearing in the trailer and on the posters. Bilbo (Martin Freeman), the dwarf leader Thorin Oakenshield (Richard Armitage) and the human Bard (Luke Evans) shoulder much of the weight of the plot. Bilbo, Thorin and the other dwarves have to defend their mountain stronghold from angry elves and humans before these warring factions join forces to fight an even bigger threat comprised of orcs (goblins in the book) and wargs (giant wolflike animals). In case you forgot about The Lord of the Rings, there are plenty of nods and setups for that series with certain characters, so all six films fit together in a way only rivaled by the current Star Wars series.

Acting has always been strong in Jackson’s Middle-earth films. Freeman and Armitage do probably the best work, yet most of the cast members have their moments in the spotlight. I’ve found Lilly captivating ever since her years on Lost, so if there’s a way for Jackson to give Tauriel a spin-off within Tolkien’s canon, I’m asking for it right now. As I alluded before, there’s a scene — ironically, it’s not in the book — that is the best in this finale. It involves Ian McKellen as injured wizard Gandalf, legend Christopher Lee reprising his role as wizard Saruman, Hugo Weaving as elf leader Elrond and Cate Blanchett as elf Galadriel. I won’t say more except that you’re bound to cheer during and afterwards. Lee Pace, Orlando Bloom and Benedict Cumberbatch continue their involvement, but they all have limited screen time. Ryan Gage steals scenes as Alfrid, the oafish toady and assistant to the Master of Lake-town (Stephen Fry). There seems to be a push to wrap up everyone’s stories or show them for even just a few seconds doing something heroic in the titular battle.

The Battle of the Five Armies is a fairly straightforward affair. Readers of the book will still be impressed with Jackson’s interpretation of the events and the invention of a sequence on a stretch of ice. Jackson excels at taking the extraordinary and making it seem as normal as your real life outside the theater. That kind of attitude, drama and even a little humor inform the battle, too. The dwarves are led by Dain, and Billy Connolly is perfect to portray this feisty combatant. Orcs Azog (performed by Manu Bennett) and Bolg (performed by Lawrence Makoare) are digital characters that are essential to this part of the story. It’s easy to identify del Toro’s influence on the battle scenes because there are a few unusual monster fighters that participate that would look right at home in any of his other movies. Although the final scenes in this sequence stand out, I still prefer the siege in the The Lord of the Rings: The Return of the King. There just isn’t enough oomph for me when minutes earlier the dwarves, elves and humans were arguing over who more deserves the gold from the mountain fortress. We’re now supposed to accept that they’re a unified alliance? For me, that was always a weakness of the book that ends up magnified in the movie. There are plenty of heads and limbs flying in the melee combat, so expect some gross moments as well as humor. 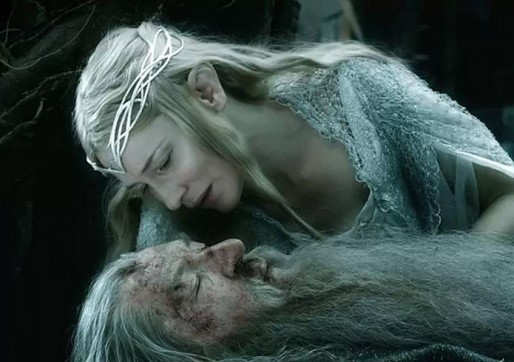 At this point in Jackson’s career, excellent special effects are expected. He doesn’t skimp at all, and there are some magnificent sequences like the battle with Smaug as he rains fire onto Lake-town and the bit with Gandalf, Galadriel, Elrond and Saruman. (That sounds like a law firm.) What I like best about Jackson’s work is that the effects don’t get in the way of the story. If it can be imagined, it will be in the film if it’s part of the story. The work on The Lord of the Rings prepared Jackson for The Hobbit, so creatures, lustrous landscapes and magic are all part of Jackson’s toolbox for telling a story in Middle-earth. If there were more stories to tell, I would bet that they’d have the same style of these six movies. This is a rather visually dark film, so you don’t get much of the beauty of the New Zealand landscapes to appreciate. The layers of special effects and practical sets combine seamlessly to represent this war near the Lonely Mountain.

The score by Howard Shore has an even more powerful effect on the moviegoing experience than in past entries. I liken it to the score for The Lord of the Rings: The Return of the King. They both get very dark before the more positive finales, and that kind of arc lends itself to more interesting music and sound cues. Billy Boyd, the actor who portrayed hobbit Peregrin Took in The Lord of the Rings, sings the passable end credits song “The Last Goodbye,” which serves as a both a goodbye to this film as well as all of Jackson’s time spent with Tolkien’s creations. Philadelphia audiences will especially get some chuckles when there’s mention of the eagles in the dialogue. (No, it’s not really those Eagles that they’re talking about.) For further laughs, Freeman’s hosting gig on Saturday Night Live on 12/13/14 included a great spoof of The Office as if set in Middle-earth. Although this movie ruins some of the momentum built up in the previous two films, especially with regard to Smaug’s brief appearance in the opening scenes, Jackson was the best choice to helm this adaptation. Tolkien fans will find parts that they really enjoy, and others will focus on Tauriel’s love story or the battle to keep them interested. The Hobbit: The Battle of the Five Armies should have blown me away. Instead, I just felt like I got what I expected and not much more.