When I first heard about the planned adaptation of The Hobbit, I thought that the book would translate well into a long, amazing movie. Later on, the project passed through many hands before landing back where it belonged in the lap of director Peter Jackson. In the era of adapting single books into multiple films spawned by properties like The Twilight Saga, I saw no real way to make three films out of The Hobbit because there just wasn’t enough material. Evidently, Jackson saw things the same way. He added characters and background scenes from the appendices to The Lord of the Rings and the history behind the events in The Hobbit to produce a fully realized masterpiece even better than the book in The Hobbit: An Unexpected Journey. I had hoped for more of the same with the second film in the series. Although there are many things that I like about it, I found The Hobbit: The Desolation of Smaug to drag out scenes unnecessarily and ultimately exhaust me rather than exhilarate me as its predecessor did.

For those new to fantasy films from the last decade or so, Jackson directed all three films of The Lord of the Rings and also this trilogy based on The Hobbit by J.R.R. Tolkien. Jackson shares the writing credit with Fran Walsh and Philippa Boyens as he did on the previous trilogy, and Guillermo del Toro also gets listed as a screenwriter because he was at one point going to direct and write these films. Not only does Jackson’s directing style make the films feel like they’re all part of the same universe, but the dialogue and humor are also consistent throughout. This movie is no different. As in life, there are moments of great joy as well as times that are more challenging or serious. As with The Lord of the Rings: The Two Towers, there is a lot of preparation going on here to get the pieces in place for what will likely prove to be a satisfying finale to the trilogy. Unfortunately, that also means that we have to slog through a bunch of stuff added to the story to pad it out for an extra-long run time. Jackson felt that the first trilogy was really just one long movie split into three pieces per the necessities of the moviegoing experience, and I suspect that he looks at this trilogy in the same way. There will inevitably be a viewing marathon leading up to the release of the third film, and you can judge for yourself at that time where the ebbs and flows of the full story take place.

Previously in Middle-earth, hobbit Bilbo Baggins (Martin Freeman) embarked on a journey at the request of the wizard Gandalf (Ian McKellen) and a group of 13 dwarfs led by Thorin Oakenshield (Richard Armitage). After some initial adventures in the wilderness and mountains near his home, Bilbo and the group are in sight of the Lonely Mountain that the dwarfs once called home and now hope to reclaim after they figure out how to get rid of a nasty dragon called Smaug (voiced with evil dripping from every word by Benedict Cumberbatch). The travelers largely spend time in two areas of Middle-earth — the elf city run by Thranduil (Lee Pace) in its environs in Mirkwood Forest and Laketown near the Lonely Mountain. Although there is a small familiar sequence in which the “skinchanger” Beorn (Mikael Persbrandt) assists the group, many of the scenes are enhanced with new characters or plot elements. Lost fans will enjoy the major role created for Evangeline Lilly as the elf Tauriel, a possible love interest for Thranduil’s son Legolas (Orlando Bloom) as well as “tall” dwarf Kili (Aidan Turner) in a love triangle. In Laketown, Luke Evans plays major character Bard, and even Stephen Fry shows up as the Master of Laketown. A refreshing addition to the first film, Radagast (Sylvester McCoy) returns to offer advice to Gandalf. The plot ultimately leads to Bilbo and the dwarfs visiting the Lonely Mountain and encountering Smaug.

I was impressed with so much in the movie. It’s a huge plus that Jackson filled out the story by showing what events led up to the dwarfs showing up at Bilbo’s house as well as where Gandalf goes when he leaves the group. I don’t like spiders in the least, so I knew that I would be bothered by the spider sequence in the movie. Yes, it’s creepy and scary; I thoroughly enjoyed it from the spider-free comfort of my seat. Jackson’s spiders are both a little familiar and fantastically large. Early in the film, Bilbo and the dwarfs make an escape in barrels bobbing in a river. This is perhaps the highlight of the entire motion picture because it mixes comedy, stunts, orcs, elves and combat as fluid as the motion of the barrels downstream. The standout character is the redhead elf whose name escapes me; you’ll love his contributions to the scenes. All of these parts that I liked take place in the first half of the movie. The second half gets more serious and instead feels forced into place as necessary setup for the next film. There must be a better way to break up the material. 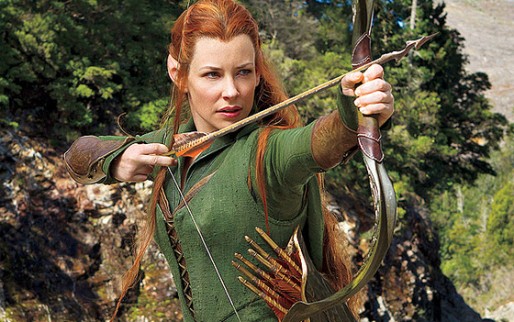 The special effects are, of course, stupendous and jaw dropping at certain points. As we learned with Jackson’s first trilogy, special effects are only as good as the plot or character behind them. When the technology allowed motion capture of an actor like never before, it permitted the creation of a digital character like Gollum who was only fully realized when Andy Serkis delivered his performance. Similarly, Smaug took so many months of rendering computers to create, only to have the life breathed into him by Cumberbatch. Jackson gets Smaug right as far as a Tolkien dragon — less dinosaur and more lizard. Smaug slinks around the dwarf’s stolen gold in his witty repartee with Bilbo, and this final set piece of the film jumps back and forth between Smaug’s lair and Laketown for what seems like forever. Although you never really want a Jackson movie to be over, this one at least makes you want to take a break. The first trilogy was released in home versions with additional material to enhance and lengthen the films. This time, I think he actually gave us the enhanced version in theaters.

If you blink, you’re going to miss some cool cameos in the movie, including one from Jackson himself. Ed Sheeran contributes a good song called “I See Fire” for the end credits. Howard Shore continues his role here as the musician for Jackson’s Middle-earth movies, and his ambitious score has a nice mixture of anthemic themes, jaunty numbers and serious-drama music. You know that middle part of a concert when the band plays a short acoustic set or the deeper tracks on their new album? You still love the band, but you can bear to pull yourself away for a while until the inevitable hits. Some people refer to these entries in the set list as “bathroom songs” or “break songs” because you won’t miss much if you have to run out to the bathroom or grab some more food and drinks. The Hobbit: The Desolation of Smaug is the equivalent of such a song sequence. You will enjoy it if you stick around, but the best part and real fun come with the finale.