The next grand tale from the author of the Twilight Saga pits humanity against an alien race that exists by inhabiting the bodies of other races in The Host. 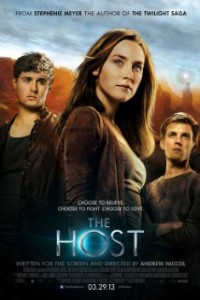 A race of aliens known as Souls takes over Earth over with almost no bloodshed. These Souls take over a human and eradicate all of their memories and personality leaving the Soul to thrive in its new host. Each Soul can do this time and again. We learn that Souls can live on this way for a millennia moving from one host to another as needed. Everything is as it should be until a soul inhabits the body of Melanie Stryder (Saoirse Ronan). For unspecified reasons the original Melanie isn’t erased and lives on in a symbiotic relationship with the soul known as The Wanderer.

When the leaders of the souls find out about the problem they explain that they’ll simply move the Wanderer to a new host leaving Melanie to die. The Wanderer and Melanie, however, have forged a true connected relationship and the thought of killing Melanie no longer sits well with The Wanderer. Nor, of course, does it sit well with Melanie. The two/one decide to flee to Melanie’s family whom she believes may still be free of Souls hidden out in the New Mexico desert. The Souls will have none of this and the local leader, known as The Seeker (Diane Kruger) is hell-bent on hunting them down.

The story is intriguing but also marred by its own limitations. The Souls are supposedly very benevolent and honest.  This makes for some rather flat interactions between humans and Souls. As the story expands we meet other characters but they’re all fairly paper-thin and much of the plot comes off as fairly silly. The dialogue–especially when Melanie “speaks” to The Wanderer–is extremely sophomoric.

Then there’s visual elements that never get explained and drag the overall feel of the film down. For example, all the lead Souls insist on traveling around in overtly silver vehicles (cars, trucks, helicopters). Why? Who knows.

William Hurt as Melanie’s Uncle does a solid job and gives the film a sense of respect it wouldn’t have otherwise. However, his performance is so much better than the rest of the cast that it sticks out like a sore thumb.

This is also a film that’s clearly for a very young audience and be aware that if you’re outside that demographic you’re in for a challenging viewing. Girls came and went during the film. Some showed up at the beginning only to leave by the middle (often just a few friends of the group at a time) never to return. Others showed up in the middle of the movie as if it was the most normal thing to do. The one thing they all had in common was absolute continual cell phone use. I don’t think there was a single moment of respite from multiple cell phones. I found it impossible to believe that these people could have absorbed much of any of the plot. I guess that’s hardly the point of their being there. It seems that going is more of an event and the thing to do more than actually enjoying the film itself.

The story also leaves little doubt about this being the hopeful first in its own series. I’m curious but not all that hopeful.