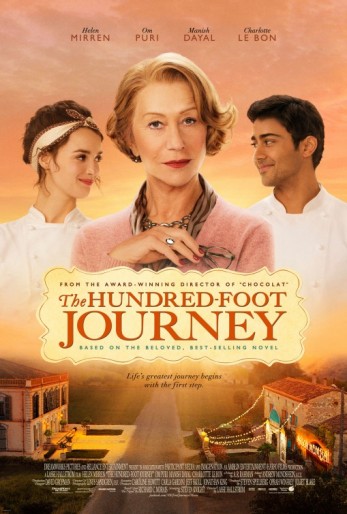 A young, aspiring Indian cook hopes to one day fulfill his mother’s dreams by becoming a great chef in The Hundred-Foot Journey.

Hassan Haji (Manish Dayal) grew up surrounded by the aromatic ambiance provided by his family’s well-regarded Indian restaurant. His lifelong fascination with food came directly from his mother. She spent many long evenings lovingly sharing her most treasured culinary secrets with her cherished child. When an unforeseen tragedy forces the family to relocate, they decide to move from India’s capital city to the heart of haute cuisine itself — France. In a small town just outside Paris, they purchase an abandoned eatery and begin transforming it into the area’s only Indian restaurant. None of the frenzied commotion goes unnoticed by their cold and snobbish neighbor, Madame Mallory (Helen Mirren). She owns the area’s most respected French restaurant and has no intention of exposing its meticulously-earned reputation to the antics of a bunch of upstart foreigners. 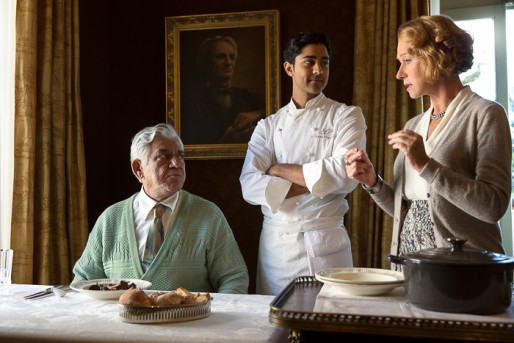 Two-time Oscar-nominated director Lasse Hallström (My Life as a Dog and The Cider House Rules) gives us a mouthwatering tale of clashing cultures, cuisines and characters. Hallström’s impressive body of work includes no less than five other films that I list among my favorites. In his latest effort, we encounter a story not all that unfamiliar from one of those — 2000’s Chocolat. That film featured a war over sugary confections, while this one focuses on the main course. Such a close parallel is virtually assured to annoy a long list of blasé reviewers, but for everyone else, it’s a delightfully delicious delicacy.

The characters are nearly as rich and diverse as the luscious dishes that tantalize our eager senses. Dayal grows quite literally from the shadows into a capable, rather charming lead. His main cohort is one of Madame Mallory’s staff, Marguerite, who’s played beautifully by Charlotte Le Bon. Their playful interaction is its own sweet reward. The Indian clan is led by their resilient and resourceful father, played by Om Puri, who’s every bit as effective as the rest of the leads. Hallström uses him to great comedic effect, providing the film with just enough lighter moments to keep us smiling throughout. Of course, Mirren provides the best icing on a flawless cake.

The film does run about one story line too long, particularly with a late sequence of scenes that temporarily pulls us out of the film’s hypnotic beauty. Aside from this minor plot indulgence, it’s an adorable, heartwarming feast that no one should experience on an empty stomach.