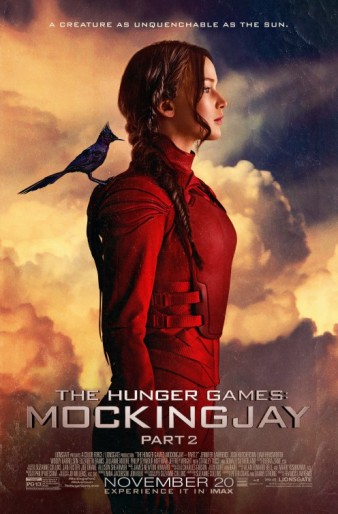 There has been an annoying trend in recent years to split up the adaptations of the final books in popular series into two or more movies. Whereas it made perfect sense for Harry Potter and the Deathly Hallows because there was just too much content for one movie, it was just milking it to have three movies represent The Hobbit instead of a reasonable two and to now split Suzanne Collins’s novel Mockingjay into two parts. I don’t care if the result is one long movie or nine shorter ones. I just want to be entertained and engaged for their duration. Sadly, that is not the case with the final film that started with The Hunger Games. I was bored to the point where I would have offered myself up as tribute just to get out of the theater and into something exciting. Lead character Katniss Everdeen is known as the “girl on fire” in these films, but with The Hunger Games: Mockingjay – Part 2, the fire is out and what’s left is running on fumes.

Director Francis Lawrence and writers Peter Craig and Danny Strong continue their roles here from The Hunger Games: Mockingjay – Part 1, and the story continues right where the previous film ended with Katniss (Jennifer Lawrence) surviving an attack from Peeta Mellark (Josh Hutcherson), fellow victor of the titular games and one of Katniss’s love interests. This film is all about tying up loose ends, so Katniss’s mission is to end the suffering and oppression in the dystopian Panem by defeating President Snow (Donald Sutherland) and taking over the Capitol with the rebels. Advised by President Alma Coin (Julianne Moore), Katniss’s squad includes friend and other love interest Gale Hawthorne (Liam Hemsworth), Finnick Odair (Sam Claflin), Cressida (Natalie Dormer) and soldiers Boggs (Mahershala Ali) and Jackson (Michelle Forbes), among others. The group has to survive many obstacles, notably traps called “pods,” as they sneak into the Capitol for a final assault on President Snow and his forces.

The performances are as stripped down and bland as the costumes and bleak environments. I expect better from Lawrence as Katniss, and she simply walks through this role as if she’s as unenthused as I was watching her. I realized while watching that much of the life from the first two films came from actors who are reduced almost to cameos here — Woody Harrelson, Elizabeth Banks, Jeffrey Wright and Stanley Tucci. Standout Dormer from the previous movie has little to do here, and another strong personality (Forbes) takes her place in prominence. This is Philip Seymour Hoffman’s last performance, and he finished enough of his scenes for the filmmakers to not rely heavily on digital trickery to add him into others. The greatest misstep in the casting is not giving Jena Malone more to do as Johanna Mason. Malone has an impressive list of roles in which she got better and better over the years, and her Johanna commands the screen and steals it away from the almost-wimpy Katniss. Malone only appears for a few minutes; she’s bald and skinny to the point of skeletal, but she exemplifies what it means to own a role.

The movie isn’t a total loss. Unfortunately, the great action sequences tend to underline even more how the rest of the proceedings are somber and unexciting. The pods provide unique challenges because the characters need to pass their positions to advance on the Capitol. Those scenes reminded me of a much better example of environmental dangers in The Maze Runner. The only truly enthralling part of the movie takes place underground as the squad gets boxed in by slimy mutated creatures referred to as “mutts” and other unexpected attacks. This section reminded me of why I like the first two films so much; here, it’s too little, too late. Wedding scenes usually bump up the fun and enjoyment; the one in this flick feels like a traditional ceremony mashed with Hee Haw.

I was impressed enough with The Hunger Games when I saw it to buy the books. Although I never got around to reading them, the concept was appealing to me and seemed to have enough to sustain a series. Sadly, the problem with this movie and its predecessor is that the source material is severely lacking with the third book’s story. There were many directions where Collins could go with her finale, and she wrote a dark, talky, slow plot that really doesn’t belong. I expect an explosive, compelling ending to a series of books or movies, and that’s not what this is about.

The flamboyant Effie Trinket (Banks) had her role expanded earlier only for it to all but vanish in the Mockingjay adaptations. Even if she had no real part in the book, as I understand to be true, you take a character like that or Johanna and give her more screen time. A new character named Tigris (Eugenie Bondurant) offers a taste of Collins’s creativity with her unusual look and backstory, so all is not lost. The role of President Alma Coin brought to mind the lyrics of “Won’t Get Fooled Again” by The Who: “Meet the new boss/Same as the old boss.” The biggest injustice of this movie is that there is no finality for some of the major characters. I thought that I had fallen asleep and missed something, but a quick conversation with a fangirl of the series confirmed that the filmmakers truly did not wrap up things and left her as unhappy as I was with this experience.

There’s a moment when you hear Sutherland’s distinct voice off screen, and I was immediately taken out of the film because it sounded like one of his orange juice commercials. It’s easy to keep my interest during a motion picture, and if I’m distracted by a few lines of a character’s dialogue, there’s something wrong. One of the many ad campaigns puts Lawrence in a beautiful red leather outfit, but that has nothing to do with the movie at all. The director has a background in music videos, and the red suit is just another reminder that his approach emphasized the glitz without much substance. There’s no question that Katniss will long be remembered as a powerful female role that will be popular at Halloween and cosplay events. Unfortunately, The Hunger Games: Mockingjay – Part 2 gives Katniss a disappointing send-off. If you want to see a more impressive woman fighting injustices in a memorable costume, I highly recommend the new hit series Supergirl and its star Melissa Benoist. 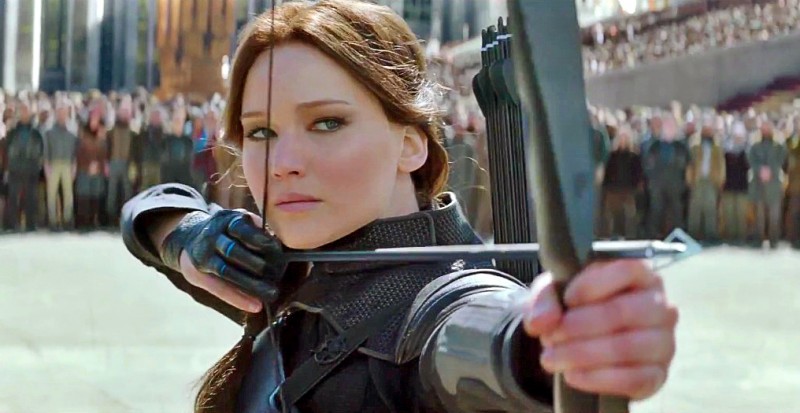