A heartless mob hit man plies his daily trade of death and dismemberment while also managing to keep his job a secret from his wife and two daughters in the true story of The Iceman. 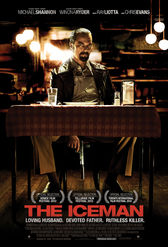 Richard Kuklinski was a monster the likes of which the world has rarely produced. Here was an individual who, due to a poor and often brutal upbringing,  was never taught the value of life or to empathize with the plight of others. That disconnected psyche and large muscular physique made him the perfect killing machine. This wasn’t lost on a local mobster who recruited him early on to handle the delivery of “messages” to those people who ended up on the wrong side of the family business. The amazing part of the story is that, all during his career in killing, dismemberment and freezing of bodies to mask the time of death (and thus the nickname), Kuklinski maintained a rather normal middle-class existence in a nice home with a normal wife and young children, none of whom had any clue about his actual job.

This true story is the focus of The Iceman starring Michael Shannon as Kuklinski. The film starts in 1964 with Kuklinski on a date with his future wife Deborah (Winona Ryder). He tells her that he does voice-over work for cartoons like Cinderella when, in reality, he dubs the audio for porn movies. That day job exposes him to some seedy people, including a local soldier in the Gambino crime family named Roy DeMeo (Ray Liotta). DeMeo’s impressed with the steely Kuklinski and recruits him as a hit man for the mob. The rest of the story covers his balancing act between his two incredibly different worlds.

The plot is absolutely riveting, driven mainly by a stellar award-worthy performance from Shannon. The producers couldn’t have done a better job casting him in the role. Kuklinski was known for his emotionless demeanor and cold, dark, hair-raising stare, and no one can embody that more than Shannon. This is easily his best work to date. The visuals fit the time frame flawlessly. This was the 1970s New Jersey I grew up in. It’s grainy, slightly muted with gray overtones. The score builds the tension and sets the appropriate tenor on cue. You’ll feel anxious every time you sense Kuklinski’s about to pop. It’s an eerie feeling but just what the story should be providing.

Ryder does a decent job, though Deborah never really materializes as a character. We never fully buy into her connection with him and never really get inside her head. We only get glimpses of needs going unfulfilled but that’s all, and I suspect for some, it might make or break their view of her claim of knowing nothing.  Kuklinski’s real life widow, Barbara (renamed Deborah in the film), is on record calling the movie “far from the truth,” which might explain why the writers had trouble fleshing out Deborah’s motivations.

DeMeo is a mobster whose stability hangs on the thinnest of brittle twine, ready to snap at the slightest tug, and few can pull that off with the ease Liotta does here. We also get some noteworthy efforts from James Franco in a curiously small role, David Schwimmer as a DeMeo underling and Robert Davi as DeMeo’s boss.

The one area of surprise is the lack of background perspective for why Kuklinski became the monster he was. We get extremely short snippets that hint at a bad upbringing but very little else and never enough to get us a real understanding of his mind-set. We know, for example, that his brother died from a beating by his father. The film also seems to suggest that everything was normal until roughly 1964 when an on-screen incident caused him to snap. In actuality, he’d been killing people since the late 1940s and he tortured and killed neighborhood dogs and cats for fun as a child — had it been known, it would have entirely changed the feel of a late scene. Aside from this caveat, The Iceman is a powerful, unvarnished look at pure evil. It’s well worth the ticket price.