The term “The Ides of March” refers, in modern parlance, to an impending doom. It’s most common use is in the William Shakespeare play Julius Caesar who recounts a seer warning Caesar in advance of his assassination to “beware the Ides of March.” In that case it was simply a reference to the middle of the month. 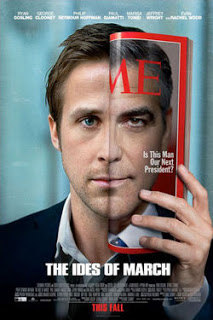 A film named The Ides of March pretty much tells the informed viewer that things in the film are likely to go very badly and that is very much the case with the plot of this movie. One of today’s most flexible actors, Ryan Gossling, plays Steve Myers, a political consultant on a meteoric rise now working for a Governor (played by George Clooney) whose trying to nail down the Democratic ticket for the upcoming Presidential election. Gossling reports to veteran consultant Paul Zara played flawlessly (as usual) by Philip Seymour Hoffman.

Everything is chugging along just fine until one day the chief consultant for the competition (played by Paul Giamatti) contacts Steve to suggest he should come to work for them as he’s certain his guy is going to win. Everything goes downhill from there.

There are also some smaller (but equally important) roles played by Evan Rachel Wood and Marisa Tomei. Wood is downright haunting in this story as an intern working for the Governor.

The main thrust of the movie asks the timeless question of whether it’s at all possible for anyone to run for high office without compromising their morality or ethics. That ground is well-covered by many films so to stand out this one would need to bring something new.

The first 20 minutes of the film plod along without anything of much interest happening. Then, suddenly, the world starts to come apart and the story grabs hold of the viewer. Unfortunately its flaw is that it doesn’t quite do a lasting job of holding us and gets lost in minutia along the way. It does find its way once again and delivers a memorable ending that stuck with me for quite some time. My son came with me and commented that this is what he thinks politics must be like and I’d have to agree. I’m not sure I can say the film delivers much in the way of novelty but it’s still a worthy film if not a perfect one.