Ewan McGregor and Naomi Watts star as husband and wife Henry and Maria, vacationing with their three sons in Thailand for Christmas. Their idyllic excursion comes to a brutal end when the infamous tsunami comes bursting through their resort and scattering everyone. 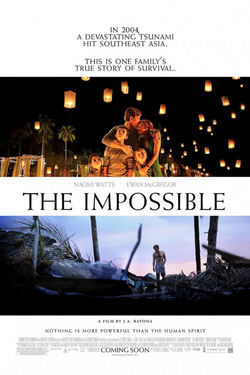 The early scenes of the movie involve jaw-dropping, highly realistic recreation of the actual event. I cannot begin to fathom how they managed to film these scenes with such incredible authenticity. You can feel the cold, harsh water surround you even in the safety of your own seat.

The rest of the film focuses on the struggle of family members to survive and, hopefully, reunite.

My biggest qualm with the film is that this is a classic case of a preview entirely destroying the plot of the film. It gives away all of the important elements. If you’ve seen it then you know what’s going to happen and how it all turns out (more or less). Having seen the previews I assumed the movie would take the story in a different direction. Alas, it didn’t so much of the potential drama was deflated for me. What remains is still a compelling story.

The cast is wonderful across the board and the ambiance is spot-on.

I still feel the film would have been much better served focusing far more on the survival elements of the journey and that of the others the family comes in contact with. As it is it’s simply a bit too myopic for its own good but certainly worthy of your time.