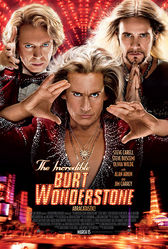 I must confess that I’m a huge magic fan. From an early age, I wanted to be a magician, and I was lucky enough to meet Harry Blackstone Jr. backstage when I was at the height of my interest and skills. Over time, I continued to see magic shows as they came through town. I was always glued to the TV for the yearly David Copperfield special. He and Penn & Teller are favorites for different reasons. I think that Penn & Teller’s subversive influence caused me to wave to Copperfield during his surprise appearance in the audience in one illusion as the audience concentrates on the stage. I knew his show so well that I knew when he would make that appearance on a motorcyle. Imagine my anticipation of a film that mixes magic with comedy as two great comedians portray fictitious Las Vegas magicians. The Incredible Burt Wonderstone made my enthusiasm disappear because it was so boring and unfunny. Billed as “Abracatastic!” on the poster, I would instead call it Presto Lame-o.

Director Don Scardino has a long list of directing credits for TV shows, including 30 Rock, 2 Broke Girls and The Mindy Project. The source of the movie’s problems may just be that directing a feature-length film is nothing like directing TV episodes that are comprised of multiple segments of 12 minutes or less that each end in punch lines or cliffhangers. Many directors just can’t make that transition successfully. Cowriters Jonathan Goldstein and John Francis Daley also wrote the successful comedy Horrible Bosses. Perhaps in different hands, The Incredible Burt Wonderstone may have actually been good instead of a notch above lifeless.

Burt Wonderstone (Steve Carell) and Anton Marvelton (Steve Buscemi) have peaked after 10 years and are going down the other side of the hill as Las Vegas magicians who once filled a showroom and now barely cover costs with ticket sales. Burt and Anton grew up together and dreamed of stardom in magic, so it’s even sadder that things have come to this. They snipe at each other and, even worse, are nasty to the people around them, including lovely assistant Jane (Olivia Wilde), who dreams of the spotlight as a star magician instead of the help. The shows were dynamic and exciting, including their famous hangman illusion — designed by magic consultant Copperfield, who also makes a cameo appearance. Now everything looks so hammy, and Burt and Anton are just going through the motions. Along comes Steve Gray (Jim Carrey), a stunt magician a la David Blaine who does things like hold his pee and sleep on hot coals. Casino owner Doug Munny (James Gandolfini) tells Burt and Anton that they need to garner the kind of excitement that Steve attracts or they’re gone. A disastrous stunt in a suspended glass box pretty much ends the reign of Burt and Anton as you’ve probably seen in the trailer.

There are many opportunities for comedy, but it just doesn’t work. I truly didn’t laugh at all and maybe only chuckled a few times. I think sometimes that test audiences should have laugh meters hooked up to them like polygraph devices and that purported comedies should have to pass a certain threshold to earn release to theaters. Jay Mohr has a small role as Rick the Implausible, and that wouldn’t make a dent in the meter reading. The film transforms into an endurance test, and then Alan Arkin saves the day. Arkin has had an almost second (or third) career with his appearances in movies like Little Miss Sunshine, Stand Up Guys and Argo in which he steals every scene with his deadpan delivery and commanding presence. The Incredible Burt Wonderstone thankfully gives us that version of Arkin. He plays Rance Holloway, a legendary magician whose kit and TV shows inspired Burt and Anton. He lives in a retirement home in Las Vegas that’s far out of the spotlight, and Burt takes a job there entertaining the guests because he can’t get a job anywhere else. Even Copperfield won’t let him help out with his act.

When Arkin appears, the film goes from drowning like in a Houdini water torture tank to barely floating like when they use two chairs and a plank to suspend someone in midair. The material doesn’t get much better, but Arkin’s delivery of it and crotchety portrayal of Rance make it tolerable. The last section of the film picks up a little, but it’s a case of too little, too late. The spark arrives in the movie when the twinkle in Burt’s eye and love for magic return. That switcheroo offered some hope for a big finish, but there was still a lot of nonsense with Carrey to endure. Many Carrey films are a mixture of his wacky faces and contortions with a story where he might act more normal. Every scene with Carrey is the animated version, and that’s not tolerable after a few scenes. By the time he’s bashing his head into tables, you just want him to knock himself out for the rest of the movie and perhaps a few others.

If there’s one aspect of the film that works other than Arkin’s acting, it’s the infusion of magic throughout the film. Copperfield can at least proudly stand by his consultant role. Burt, Anton, Jane and Rance all feel like they’re part of the magic community in Las Vegas, and the illusions vary from the classic to the inventive like the hangman illusion. Carell and Buscemi seemed like a dream pairing when I heard about the film, so it was a complete shock that I didn’t like either of them for most of the movie. It’s not my job to figure out why something worked; I’ll just tell you whether I enjoyed it or not. This is akin to magic shows. I don’t have to know a trick’s secret to appreciate or dislike its delivery. No matter who behind the scenes is responsible for the lack of humor in The Incredible Burt Wonderstone, it might be a good idea if they pull a disappearing act until they get a better handle on comedy.