Vince Vaughn and Owen Wilson team up once again to play two laid-off watch salesmen desperate to find a meaningful job in The Internship. 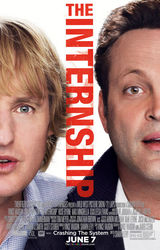 Billy McMahon (Vaughn) and Nick Campbell (Wilson) were riding high as top sales reps for a big-ticket watch company when they suddenly find themselves without a job, without a market and with dubious skills. While searching for options, Billy decides their best chance lies in trying out for an internship at Google. This is a typical fish-out-of-water story because Billy and Nick are ill-prepared for the massive culture shock involved in the generational jump they’ve embarked on. Everything they know is useless here. Even the act of simple dialogue is complicated by the dramatic differences in terms, mind-set and pop culture references of a generation at least 20 years younger.

The film must have seemed like a slam dunk for Google. It plays like a two hour-long commercial for joining their company. We see their main campus — replete with colorful free bikes, nap pods, free food and drink, sliding boards and more. Actual work seems miles away. The problem is that any college student seeing it is likely to spend more time thinking about working at Google and entirely ignoring the plot. To make matters worse, there just aren’t any decent jokes throughout the entire film. Vaughn and Wilson not only play fish-out-of-water characters but look entirely lost in the script itself — and painfully so. Like a typical Google search, the first quarter gives us some interesting results but the rest leads us to a bunch of 404 page errors.

There are a number of subplots, but none of them matter or work. Nick has a crush on a Google manager, but we never believe in the attraction or viability of it from either side. There’s also a very creepy interaction between Vaughn and the one girl on their team; it’s entirely cringe-worthy. Max Minghella plays their main adversary, but it is so full of cliches and caricature that we tire of him almost instantly.

I love Aasif Mandvi, but his manager’s character is paper thin and never really gets a chance to shine. Josh Gad plays a strange, geeky, almost ethereal character that doesn’t work. The film even finds a way to make John Goodman look terrible as the duo’s original boss. There’s another uncredited cameo by a comic star I rarely enjoy who shows up to play Nick’s temporary boss in a way that’s extremely predictable and not funny.

As a Google recruitment tool, this is a five-star effort. As a comedy, someone should have taken the time to search for some decent jokes and a better script.